The top three TV brands—Samsung Electronics, LG Electronics and Sony—are expected to increase their share of the flat panel display (FPD) market for televisions this year after purchasing one-third of the overall global TV shipments in 2014, according to a new report from IHS Technology. 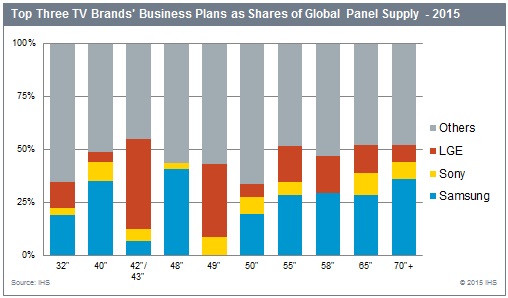 Deborah Yang, display supply chain research director at IHS, said in a statement that, based on optimistic shipment targets, the dominance of these companies will be "even more pronounced" in 2015 and will "put more competitive pressure on smaller competitors." As a result, Yang added these companies will have a "greater influence over the global panel supply this year," making them the priority customers for panel manufacturers.

Because the top three TV brands are slated to increase their buying of TV panels this year, their influence over certain panel sizes is also expected to increase, IHS said. Based on the business plans of Samsung, LG and Sony, they will make up more than half of all panel allocations for six of the most popular panel sizes. If shortages occur in 2015, other TV manufacturers may have difficulty obtaining allocations for these sizes, IHS said.

"For 48-inch, 49-inch and 58-inch sizes, in particular, the purchasing power of the three TV market leaders is very strong," Yang said. "As the largest companies' panel allocations become even bigger, smaller players could be forced to take a niche approach or be squeezed out entirely."