Despite seeing record shipments of displays for smartphones and other mobile handsets in 2014, prices declined 14 percent and another double-digit fall is expected this year, according to a new report from IHS Technology.

Total mobile phone display shipments are estimated to reach a new record high of 2 billion units in 2014. But that good news has been hindered by smartphone display average selling prices (ASPs) declining 14 percent year-over-year to $19 in 2014, down from $22 per module in 2013, IHS said. And things aren’t expected to change in 2015 as IHS forecasts another fall to about $17.

Terry Yu, analyst for small and medium displays and display technologies at IHS, said in a statement that while various display technologies such as a-Si, Oxide, LTPS and AMOLED continue to rise in shipments “panel makers are still being challenged to reduce display module prices.” In fact in 2014, panels for smartphones saw one of the sharpest decline in prices on record and “this trend of double-digit declines is expected to continue in 2015,” Yu said. 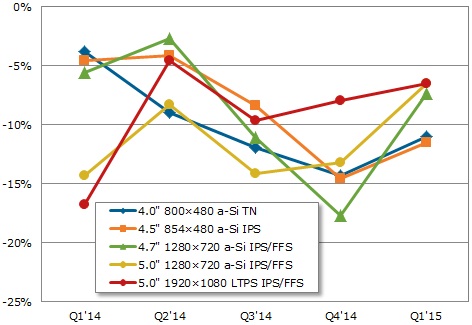 IHS forecasts a sharp decline in smartphone ASPs to take place in the first quarter of 2015.

Part of the challenges for panel makers is coming from China where aggressive pricing strategies are putting pressure on companies such as Tianma, BOE, InfoVision and Japan Display Inc. to lower prices in order to compete in the Chinese market. Because Chinese smartphone makers can use economies of scale to negotiate display prices and Taiwan suppliers are shifting aggressively to panels in Gen 5 fabs, vendors are getting squeezed from all sides, IHS said.

The 5-inch 720 HD module is the most popular smartphone display size in China, gaining more than 40 percent market share in the global market in 2014. However, this is a double-edged sword as China has become a “major battlefield for 5-inch smartphone displays,” Yu said. Demand is very strong for these displays but it is at the cost of price as pressure is coming from all vendors to lower prices, he added.

End market pricing by Chinese smartphone brands are another source of price pressure, IHS said. After the introduction of the iPhone 6 Plus with its 5.5-inch FHD display, Android-based models are now expected to come equipped with wide-quad HD displays. As a result, FHD models in the mid-range segment are expected to lower prices in 2015.

Why the AMOLED Panel Market Landscape May be Changing