Apple Inc.’s iPhone 6 Plus carries a bill of materials (BoM) that is only about $16 higher than the iPhone 6, despite costing consumers $100 more, according to a teardown analysis performed by IHS Technology.

The 16-GB version of the iPhone 6 Plus, which features a screen less than an inch larger than the standard iPhone 6 model, carries a BoM of about $211.10, according to a preliminary estimate by IHS’s teardown intelligence service. The BoM for a 16-GB iPhone 6 is roughly $196.10, according to the analysis.

The display/touch-screen subsystem in the iPhone 6 Plus carries a cost of $52.50, compared to $45 for the iPhone 6, according to IHS.

Both displays are also more expensive than for the smaller, 4-inch display/touch subsystem used in the iPhone 5S model, which cost about $41 as of October 2013, IHS said.

Because of its larger form factor, the iPhone 6 plus is able to employ a larger, higher-capacity battery capable of 11.1 watt-hours (Wh), compared to 6.91 Wh for the standard iPhone 6, according to IHS. The battery subsystem in the Plus costs $1 more than the iPhone 6’s battery subsystem, IHS said.

The iPhone 6 Plus’s camera is also $1.50 more expensive than in the camera in the iPhone 6, according to IHS.

“Apple has always been adept at offering higher-end iPhone models with enhanced, desirable features—and then pricing those versions for maximum profitability,” said Andrew Rassweiler, senior director of cost benchmarking services for IHS, in a statement.

Rassweiler noted that premium iPhone versions of the past offered higher memory configurations which made them more profitable for Apple. “While Apple continues this memory strategy, the company is also taking a similar approach with the iPhone Plus, structuring its pricing to add bottom-line profit on models that have a very desirable feature: a large phablet-sized display,” Rassweiler said.

A subsidized iPhone 6 sold through a wireless carrier retails for $200, compared with $300 for an iPhone 6 Plus. The unsubsidized pricing for the two phones is $649 and $749, respectively.

The iPhone 6 and 6 Plus each feature the A8 processor, the successor to the A7 employed in the iPhone 5S. According to IHS, the A8 exhibits new markings that are not consistent with previous A-series processors, which were manufactured by Samsung. IHS believes that Apple now is splitting its orders for the A8 processor between semiconductor foundry Taiwan Semiconductor Manufacturing Co. Ltd. (TSMC) and Samsung.

For more than two years it has been widely rumored that Apple would shift some or all of the production of future A series processors from Samsung to TSMC.

According to the IHS teardown analysis, the A8 integrates twice the number of transistors as in the previous-generation A7 processor, but is still smaller than the A7 due to the use of more advanced semiconductor manufacturing technology. The A8 costs $20 to produce, up from $17 for the A7, according to IHS.

The new iPhones are also the first to feature a near-field communications (NFC) chip, IHS noted. The teardown analysis revealed that the phones feature the PN65V NFC controller from NXP Semiconductors, as well as a previously unseen NFC-booster integrated circuit from AMS. The NFC chip is needed to support the new Apple Pay feature offered by iPhone 6 and iPhone 6 Plus. 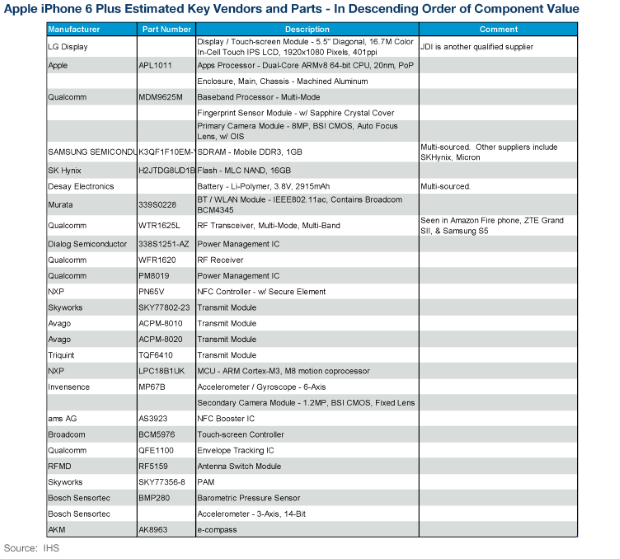 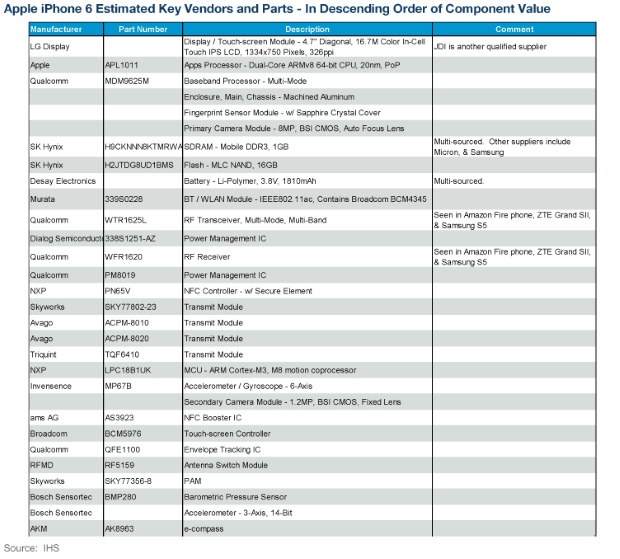 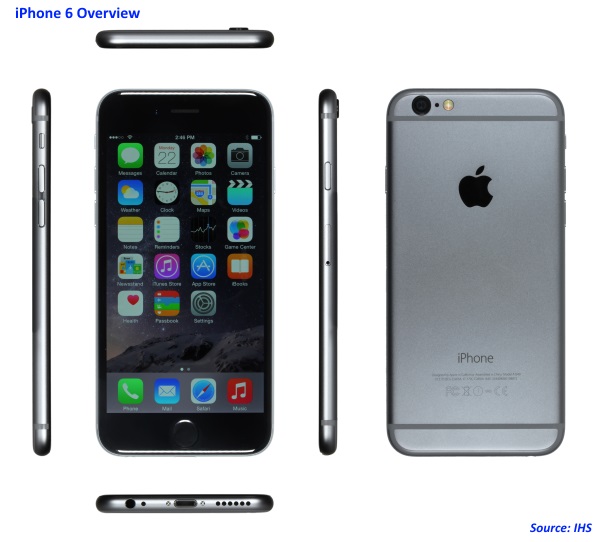 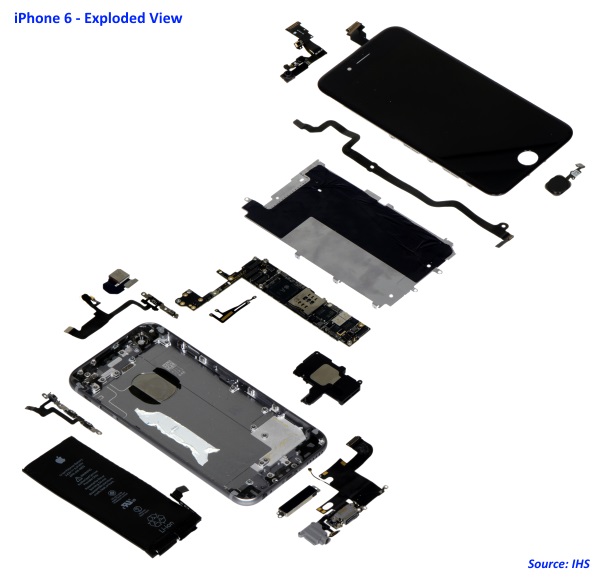 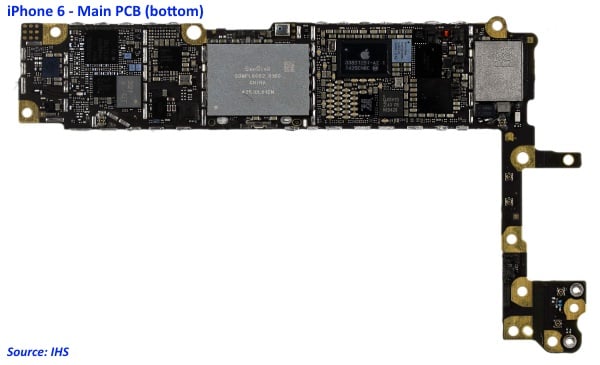 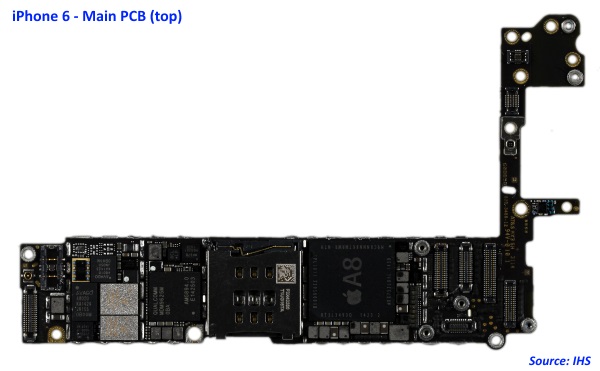 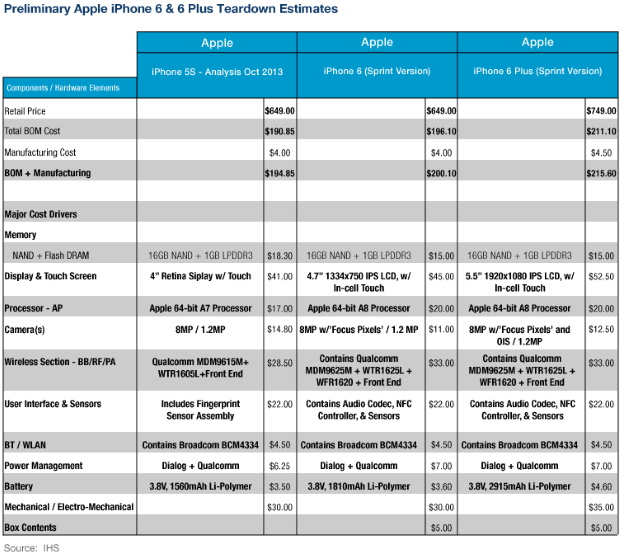