A powerful 'technology triumvirate' is emerging, ECIA execs are told

The combination of 5G, the internet of things (IoT) and cloud computing is creating a “perfect storm” that will result in waves of economic growth that will build and be amplified over the next several years.

That potential could be dampened, however, by threats that range from cybersecurity concerns, to inadequate intellectual property protections and international trade disputes. 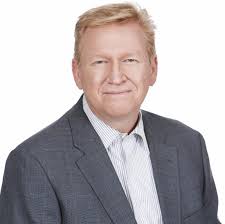 Ford presented current industry supply and demand trends, then turned his attention to what he labeled as the next “big thing.” He pointed to the convergence of 5G, IoT and the cloud as fueling a rising tide of economic potential.

Ford said that the full economic benefit of 5G likely will be realized globally, and affect a broad range of industries from retail to education, transportation to entertainment and beyond. Up to $12.3 trillion worth of goods and services could be enabled by 5G mobile technology, an amount he said was nearly equal to U.S. consumer spending in 2016 and that is more than the combined spending by consumers in China, Japan, Germany, the United Kingdom and France that same year.

By comparison, he estimated the global economic boost enabled by advances in semiconductor technology over the past 20 years at around $11 trillion.

The 5G mobile value chain alone could generate up to $3.5 trillion in revenue in 2035 and support up to 22 million jobs, Ford said. That is larger than the value of today’s entire mobile value chain and is roughly the combined revenue of the top 13 companies on the 2016 Fortune Global 1000.

Over time, the total contribution of 5G to Real Global GDP growth could reach $3.0 trillion, equal to an economy the size of India's and roughly equal to the direct contribution to global GDP between 1995 and 2015 by the semiconductor industry as a result of Moore’s Law. (Read "Moore's Law at 50.")

A movement, not a market

Ford also described IoT as “a movement and not a market.” He quoted data from Informa Tech that said the number of connected IoT devices worldwide is expected to grow 12% on average annually from nearly 27 billion in 2017 to 125 billion in 2030. As a result, the IoT movement is poised to impact nearly every stage of industry and all market segments. Much of the growth over the next five years will likely be driven by expansion in the consumer and industrial segments. By 2025, for example, Ford said that the installed base of devices in the industrial sector alone could nearly equal the total current installed base across all sectors.

Ford said that the scale of deployment is likely to advantage 5G for at least three reasons:

• Massive IoT: He said that means deep coverage to reach challenging locations, ultra-low energy use and complexity, allowing for long battery life and tens of bits per second and ultra-high density which could be on the order of 1 million nodes per square kilometer.

• Enhanced mobile broadband: Extreme coverage on the order of 10 TeraBits per second (Tbps) per square kilometer, extreme data rates that could reach multiple gigabits per second and “deep awareness” enabling discovery and optimization.

• Mission-critical control: Ford characterized this as extreme user mobility, ultra-low latency of as little as 1 millisecond, ultra-high reliability with as few as 1 out of 100 million packets lost and strong security, meaning that it can be trusted by the health, government and financial sectors.

Ford said that 5G represents a “unifying connectivity fabric” that offers a unified design for all spectrum types and designs from below 1 gigahertz (Gh) to millimeter wave.

He quoted Qualcomm, which noted that the global 5G standard will advance mobile from "largely a set of technologies connecting people-to-people and people-to-information” to a unified connectivity fabric “connecting people to everything.”