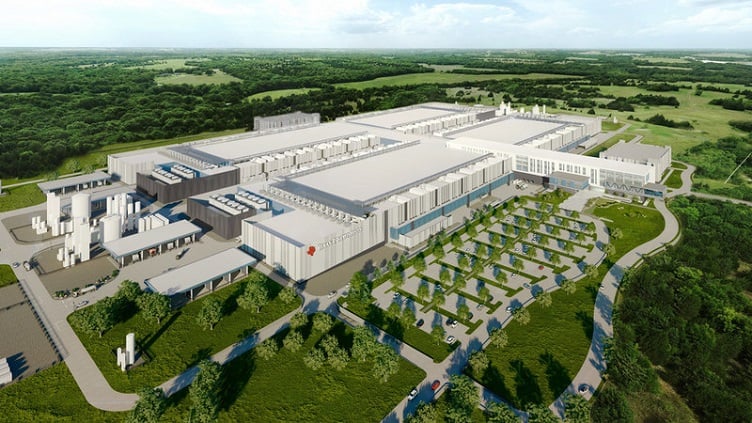 An artist rendering of the new 300mm semiconductor wafer fab that will begin construction in Sherman, Texas in 2022 with a potential of up to four fabs over time. Source: TI

Located in Sherman, Texas, the fab may be one of four potential fabs that will be built at the location to meet semiconductor demand over time. The semiconductor market is expected to grow by 5% during the next decade as the industry grows into more markets, particularly automotive, internet of things (IoT), industrial and consumer electronics.

The construction of the fab is set to begin in 2022. Production from the fab is expected as early as 2025 and the total investment potential of the site could reach about $30 billion if there are four fabs built and support 3,000 direct jobs over time.

TI said that the fabs will complement its existing 300 mm fabs including the DMOS6 in Dallas, the RFAB1 and soon completed RFAB2, both in Richardson, Texas. TI also recently acquired the LFAB in Lehi, Utah, which is expected to begin production in early 2023.

TI acquired the LFAB from Micron Technology earlier this year and paid $900 million for the facility. The Lehi fab will start with 65 nm and 45 nm production nodes for both analog and embedded processing semiconductors. The fab will move beyond these nodes if required.

The move by TI furthers that increase in development of domestic semiconductor manufacturing, which has become a hot topic since the outbreak of COVID-19.

When the pandemic hit, it caused a chip shortage where demand fell in certain areas from OEMs as they felt orders would be hindered due to the virus. Simultaneously, demand increased in other areas such as consumer and compute due to work-at-home orders and lockdowns.

But as time went on, demand from the automotive sector increased substantially but chip manufacturers had switched capacity to these other areas causing a chip shortage and impacting the supply chain in multiple ways.

With most manufacturing carried out from a handful of overseas foundries — TSMC and Samsung —companies in the U.S., the U.S. government and trade organizations renewed calls for an increase in domestic chip manufacturing.

The U.S. government is also behind the boost to increase U.S. domestic chip manufacturing. Earlier this year, the Senate passed the United States Innovation and Competition Act (USICA), which includes funding for Creating Helpful Incentives to Produce Semiconductors (CHIPS) for America Act, a bill that would help to increase U.S. domestic semiconductor manufacturing.

And fab construction has accelerated with Intel building two fabs at its Ocotillo campus in Chandler, Arizona, and TSMC recently breaking ground on its new fab in Arizona where it will initially spend $12 billion but may increase investment to $35 billion to create a “gigafab.” Samsung is also reportedly building a fab in Texas, although has yet to specify a location.