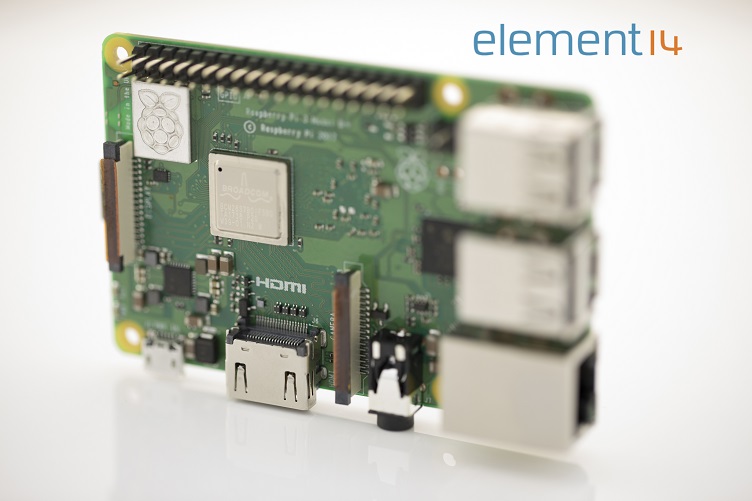 Newark Element14, a division inside Avnet Inc., has launched a new Raspberry Pi board that includes a more powerful CPU, faster Ethernet and support for Power over Ethernet.

The Raspberry Pi 3 Model B+ is built on a new quad-core Broadcom BCM2837 64-bit application processor running at 1.4 GHz, which Newark Element14 says it 15 percent faster than the Raspberry Pi 3 Model B. The new board also includes dual-band wireless LAN via a Cypress networking device that delivers 2.4GHz and 5GHz 802.11ac wireless LAN and Bluetooth 4.2 capability. The board also improves thermal management and faster Ethernet is capable over USB 2.0 with a maximum throughput of 300Mbps.

While Raspberry Pi remains a good starting point for students and makers, this new board opens up the possibility of professionals using the board for future designs, Chris Breslin, senior VP of product management at Newark Element14, tells Electronics360.

The demand from professionals for Raspberry Pi is increasing but they want the product to be easy to use, offer strong support and documentation, priced competitively and deliver most relevant features for professional use.

“The needs of this new breed of professional design engineers are the same as those customers originally targeted,” Breslin says. “They are looking for strong functionality, ease of use, support, price as well as stable product and a reliable supply chain.”

The Raspberry Pi 3 Model B+ is available to buy as a standalone board and as an Element14 starter park that includes a 16GB Micro-SD card with the official Raspberry PI 2.5A power supply and case. Newark Element14 has committed to manufacture the new board until at least 2023, which the company says it the first time a commitment to manufacture has been made at the launch of a Raspberry Pi.

The release is fitting, given it is Pi Day, and Electronics360 has it covered with a breakdown on the history of Raspberry Pi as well as 10 common uses for the developer board.