10 Common Uses for a Raspberry Pi

The Raspberry Pi single-board computer has become an important part of a maker’s toolbox. What makes the Raspberry Pi so useful is partly hardware, but more the user community. The Pi is a simple computer with a CPU, video output, networking ability and input/output pins. The best part about the hardware is the price point for its functionality, which lends itself to experimentation and development. The helpful user community and software sharing for the Pi makes it really useful compared to other platforms. New users can get up and running with something interesting quickly.

For TV with Kodi or Plex

Running the Pi as a media player is one of the most popular uses for the Raspberry Pi, done simply with software such as Kodi or Plex. Kodi turns your TV into a smart TV, with all sorts of useful standard apps as well as third-party ones. Plex is similar to Kodi, except that it is designed with a front- and back-end setup, so it needs a back-end server on a PC or other device.

If you like arcade games or classic console games then RetroPie is a good option. This software doesn’t come with games, but it can emulate many game systems and arcade machines such as Sega, Playstation, Nintendo and more. You need to find and load your own games to use, which is its own challenge. There is a range of games that work with this system, and you can even build your own classic arcade machine sic. One hint: it is possible to install both Kodi and RetroPie on one device for the ultimate in living room entertainment. 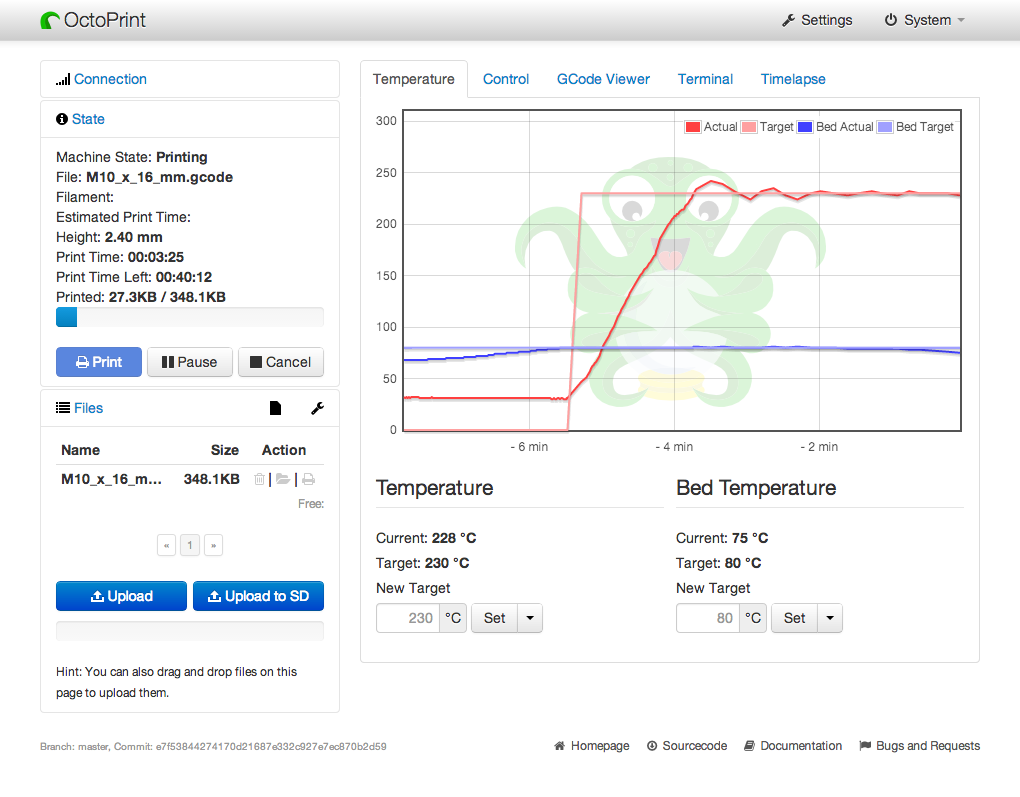 Source: Creative Tools, CC BY 2.0dedicated computer. OctoPrint will connect to most 3D printers and control them over the network. The software will allow a user to upload files for printing or prepare and modify them from any computer. Prints can be started and monitored with a camera so you don’t need to stay with the printer.

A Raspberry Pi is simply a little computer, so it makes sense that one of its most basic uses is as a computer. Users can load a Linux operating system on the device and plug in a keyboard, mouse and monitor. Connect to the internet by wired or Wi-Fi and browse the web or other things. If you want to take it a step further you can make a Pi laptop called a Pi-top. Devices with the keyboard, mouse and monitor can be purchased to make a portable Pi.

If you have an old printer and you want to use it as a network printer, then it is possible to set up a Pi to take care of that. With the installation of some software the Pi will handle the printer driver and put it on the network so that you can use it with any computer. This may be one of the more boring, yet useful tasks for a Pi.

If you are interested in SDR then you might like to know that your Pi can act as a server to allow you to access your stream from anywhere. This can be useful for monitoring radio traffic in a fixed spot or even setting it up to transmit.

Holiday lighting is a big hobby for many, although it can be quite complicated. One of the issues is that you need a computer to control and sequence the lights, and while that computer is tied up running the lights it can’t be used for much else. Additionally, if hardware fails it is possible to damage the computer, depending on how it is set up. The Pi solves this by controlling the lights and making the controls available on a network to any computer.

Smart thermostats have become popular as they can save users money, but they also talk to a cloud and can spy on users, letting advertisers or hackers know information. Making your own thermostat allows you to be in control of the connectivity and data collecting. It also means that you can customize your thermostat however you want, such as displaying the weather or upcoming TV shows.

IoT is a hot topic and involves multiple connected devices in your home that are transceiving info with each other and the cloud. In most cases these devices would talk back to a cloud server, but instead why not have them talk to your own server? Multiple thermostats, door sensors, security, water levels, flood sensors and many more, all talking to one, centralized device means you have more control over what is going on and where all that data is headed.

The Amazon Echo is an interesting device, but the key to its capabilities is what it accesses on Amazon. One

Source: CC0 public domaininteresting fact is that Amazon provides the resources you need to set up a Raspberry Pi to work as an Echo. You will need to create a free developer account to install the software and register it with Amazon. You also need to add a microphone and speakers but after that, you are ready to go. It won’t be cheaper than an Echo Dot model, but you can reuse the hardware for lots of other things.

While the Raspberry Pi may not be the most powerful computer, it is extremely flexible in what it can do. This is largely due to the user community around it and hardware that allows it to be used in all sorts of ways. Even the most novice of users can make this device do something interesting and useful in a short amount of time.

Here's a video version of this story. And for a bit of Raspberry Pi history, click here. Please enjoy... and share!