The technology behind home automation is really no big mystery. Home automation comprises a variety of industrial elements that have been built upon one another decade after decade.

To get where we are today, the technology or device had to be invented years ago. So the inventions of the light bulb, television, standard household appliances, alarm systems and computers paved the way for home automation as we know it.

A major breakthrough in the history of home automation was the X10 module, which allowed for the remote control of lights and appliances back in the 1970s. At the time, the BSR System X10 comprised a 16-channel command console, a lamp module and an appliance module. Years later, in 1989, X10 released a wireless security system.

Since then, home automation has spread to garage doors, entertainment systems and beyond.

Now, you can easily stumble upon all the home automation kits on the Internet. From the Apple HomeKit, Nest Thermostat, ceiling fan controls, lighting kits and everything in between.

I don’t want to buy, I like making my own stuff! How do I get started?

For those with a deeper desire to get their hands dirty and achieve the satisfaction of making their own gadgets, Raspberry Pi is your friend. 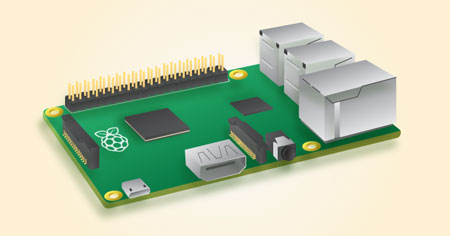 Raspberry Pi 2. Image credit: The Raspberry Pi Foundationability to perform many of the tasks a traditional desktop computer can—but at a better price and size.

The Raspberry Pi Foundation initially launched the Pi in 2011, and has since released four updated versions. The most recent was the Raspberry Pi 2, which offers a 900MHz quad-core ARM Cortex-A7 CPU and1GB RAM.

Home automation products can range from affordable, to varieties that the Average Joe may not deem worth purchasing. Therefore, DIY-ers may find it more affordable to grab a $35 Raspberry Pi 2 and automate the elements of their home themselves.

Recently, Microsoft has announced Windows 10 availability for Raspberry Pi 2, allowing even more makers to take part in connecting their homes.

In the Windows 10 developer community, Hackster.io, a plethora of Raspberry Pi 2/ Windows 10 home automation projects are displayed—such as fan controls, smart switches and thermostats. However, Microsoft has just announced that it will be holding a worldwide Home Automation Contest for developers, hackers and makers.

“Windows 10 IoT Core on the Raspberry Pi 2 is designed specifically for use in small footprint, low-cost devices, which is perfect for delivering Home Automation solutions ranging from security and lighting control to personalized entry/exit systems,” according to Microsoft’s challenge brief. Participants are encouraged to create the home automation system of their dreams.

What can I make?

It is possible to build an entire home automation system with a Raspberry Pi (along with some cool extras).

He has also programmed each monitor to send him either e-mail or audio alerts.

There are plenty of other projects to scan through by other community users, including an automated vegetable cultivation system, voice controlled electrical outlets and humidity sensors. 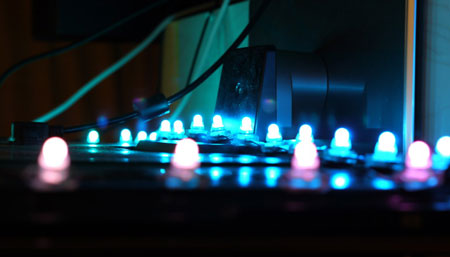 Raspberry Pi Lightberry. Image credit: LightberryAfter receiving a Raspberry Pi for Christmas one year, the duo determined the device’s potential and decided to start a blog in which they make and test different Pi projects.

This was about the same time they developed the Lightberry, the result of toying around with the small computer long enough. Lighberry is a set of Raspberry Pi-driven LEDs that work with your TV to provide colorful effects in your home.

The team’s Raspberry@home blog provides a variety of home automation projects for makers to scroll through. Some projects worth mentioning include controlling a Raspberry Pi with a TV remote and turning Raspberry Pi into a radio.

For more project ideas, the Raspberry Pi Foundation supplies makers with home automation inspiration such as magic mirror, a laser dog monitor, and a beer and wine refrigerator that keeps sticky fingers away from your spirits.

So, why use Raspberry Pi when there are so many other options for makers? You have a selection of single-board computers ranging in price and capability including Arduino Uno, Beaglebone Black, Banana Pi, Minnowboard Max, Hummingboard and Intel Galileo Gen 2—just to name a few. However, according to Szczerba, Raspberry Pi’s user base and accessibility set it apart.

“There are a ton of easily accessible software, ports and devices made for Raspberry Pi, which makes it very versatile. Also, there is always someone that had the same issue and it usually has been solved, which is a very important thing for DIY projects,” explains Szczerba.

If you do not already have a Raspberry Pi at your disposal, you can get it directly from the Raspberry Pi Foundation or from its main distributors such as Premier Farnell/Element 14 and RS Components/ Allied Electronics. You will also come across plenty of resellers online.

Model A+ will cost you $20, Model B+, $25, and the most recent Raspberry Pi 2 will run you $35, offering an inexpensive way to get started on connecting your home. The possibilities are endless and are not limited to security and lighting controls—make a new phone for your home, create a beer brewing station, design a tiny media server, or even indulge in a Raspberry Pi-powered coffee maker.