Hitchhiking Robot Clings to Underwater Surfaces Like a Remora Fish

Researchers at Beihang University in China have developed a robot that can cling to surfaces under water much the same way a remora fish clings to sharks and whales with the force of 340 times its own weight.

A remora fish relies on its head’s dorsal fin that forms an adhesive disc to attach to other marine life, or hitchhiking. This is accomplished through three parts of the fish—a soft disc lip at the periphery, lamellae in the disc interior and rows of spinules on them.

To reproduce this in a robot, researchers had to tackle the stiffness of the materials used in the prototype first.

“If we simply combine soft materials with rigid ones, the structure will soon suffer from fatigue and break rapidly under high stress underwater,” says Dr. Li Wen, an associate professor at the School of Mechanical Engineering and Automation and the principal investigator of Biomechanics and Soft Robotics Lab of International Research Institute for Multidisciplinary Science at Beihang University.

Researchers were able to fabricate the materials using a multi-material 3D printing technology that allowed them to achieve stiffness spanning three orders of magnitudes in a single printing. 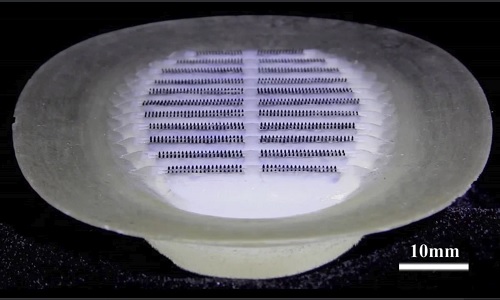 The result is a prototype that could generate considerable pull-off force up to 340 times its own weight and attach to different surfaces. Researchers say the robot saves energy by hitchhiking and does not damage the surface it attaches to.

The team believes the development could be applied to various fields such as defense technology, underwater rescue and marine ecological monitoring.