A Durable Wearable for Monitoring Diabetes 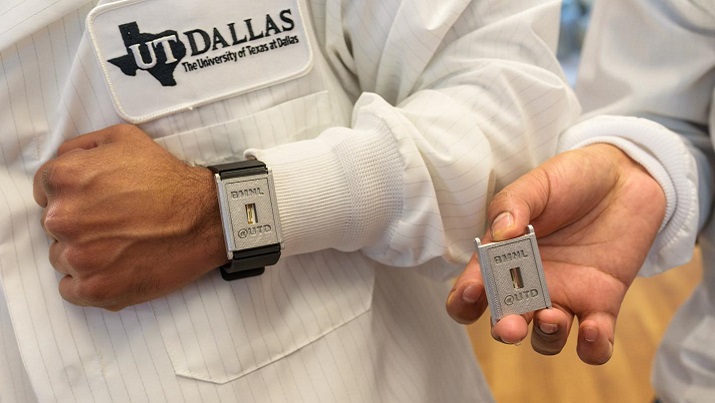 UT Dallas researchers have developed a wearable diagnostic tool that measures diabetes-related compounds. (Credit: University of Texas at Dallas)A new wearable diagnostic tool that measures three interconnected, diabetes-related compounds in microscopic amounts of perspiration has been developed by researchers at the University of Texas at Dallas.

The three compounds – cortisol, glucose and interleukin-6 – are markers that help those with type 2 diabetes manage and regulate the disease. While single-use monitors are currently on the market, the new wearable can monitor hourly readings on the compounds for up to a week. To create a device that could take so many readings without performance degrading over time, the researchers turned to room temperature ionic liquid, or RTIL, to stabilize the microenvironment at the skin-cell surface.

"This greatly influences the cost model for the device – you're buying four monitors per month instead of 30; you're looking at a year's supply of only about 50," said Erik Jonsson School of Engineering and Computer Science bioengineering professor Dr. Shalini Prasad, one of the co-authors of a recent study. "The RTIL also allows the detector to interface well with different skin types – the texture and quality of pediatric skin versus geriatric skin have created difficulties in prior models. The RTIL's ionic characteristics make it somewhat like applying moisturizer to skin."

The team’s biomarker measurements needed only a tiny amount of sweat to be reliable – 1-3 microliters, versus the 25-50 previously believed necessary. Prasad envisions the wearable devices will contain a small transceiver to send data to a cellphone app.

Prasad added that it’s not enough to detect just one of the diabetes-related compounds.

“Measuring multiple molecules in a combinatorial manner and tracking them over time allows us to tell a story about your health," she said. “If you measure levels every hour on the hour for a full week, that provides 168 hours' worth of data on your health as it changes."

Such data could provide an unprecedented picture of how the body responds to dietary decisions, lifestyle activities and treatment. "A user could learn which unhealthy decisions are more forgiven by their body than others," added Prasad.

Prasad emphasized “frugal innovation” throughout the development process of the device – using standard coating techniques that will allow for mass production without adding cost, for instance.

"Our cost of manufacturing will be comparable to what it currently takes to make single-use glucose test strips – as little as 10 to 15 cents,” she said. “We see the link between diabetes and wealth. It can't simply be a small percentage of people who can afford this."

By posting a comment you confirm that you have read and accept our Posting Rules and Terms of Use.
Re: A Durable Wearable for Monitoring Diabetes
#1

This will be one of the most useful wearable device for

young and older Diabetic in Insulin therapy. Saves the cost of strips and the discomfort of finger stabs.

thank you for this innovation.

When is it available?