Shoppers appear to be eyeing consumer electronics (CE) products this holiday season as a new survey from IHS Technology found some 68 percent of responders plan to buy a smartphone, tablet, laptop, TV game console or other electronics this year.

Of these shoppers, 37 percent said they would make a CE purchase during Black Friday, 32 percent plan to purchase online during Cyber Monday and 50 percent expect to buy electronics at another time during November or December, IHS said.

“While the fourth quarter is always the most dynamic in terms of sales, mostly due to holiday spending, this year consumer confidence is very high,” said Veronica Gonzalez-Thayer, senior analyst for consumer electronics at IHS Technology, in a statement. “Nearly half of respondents indicated a willingness to spend more than $500 on electronics for the holidays.”

Confidence is so high that U.S. consumers plant to spend an average of $769 this holiday as IHS is seeing a shift where consumers are choosing to spend money on CE devices in 2014, Gonzalez-Thayer said. Among respondents, Amazon is said to be the leader where consumers will plan their purchases this year with 76 percent saying they would buy from the online retailer. Walmart follows close behind with 73 percent, followed by Best Buy with 66 percent and Target at 63 percent. 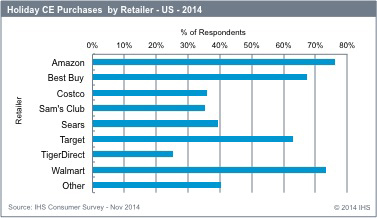 So what are consumers expecting to buy during the holidays? Among the survey respondents, televisions are high on the list with a variety of people expecting to buy a number of televisions at different screen sizes. Among the brands, 66 percent of consumers plan to purchase a Samsung, Vizio, Sony or LG TV, IHS said. However, with deep discounts expected along with other promotions, low-tier brands may find favor as well.

IHS’ survey was conducted with 800 respondents the week prior to Thanksgiving.

The Rise of Smart Cities