Despite a slow and steady increase, Ultra-high-definition televisions (UHD TVs) maintain minimal market share in the flat-panel TV space, according to IHS.

The firm cited the high relative price of UHD TVs for their inability to command a meaningful portion of the market. While UHD TVs have much higher resolution than conventional HDTVs, they can cost several times more than other types of sets, IHS said.

Nevertheless, UHD TV shipments are projected to grow to 14.5 million units this year, up from 2 million last year, as firms roll out new models, according to IHS. The findings are available in the firm’s latest TV Systems Database.

Despite the steady growth in recent months, UHD TV market share hasn’t improved markedly, IHS said. UHD TV market share stood at about 2 percent in September 2013, according to the firms. The top 13 global brands account for 75 percent of total LCD TV shipments and more than 90 percent of UHD LCD TV shipments, according to the firm.

“Growth in this year’s global UHD TV market is a reflection of plans among TV makers, especially the Chinese, to increase sales,” said Jusy Hong, principal analyst for consumer devices at IHS, in a statement. “And expansion in UHD TV volume is mostly scheduled for the second half this year.” 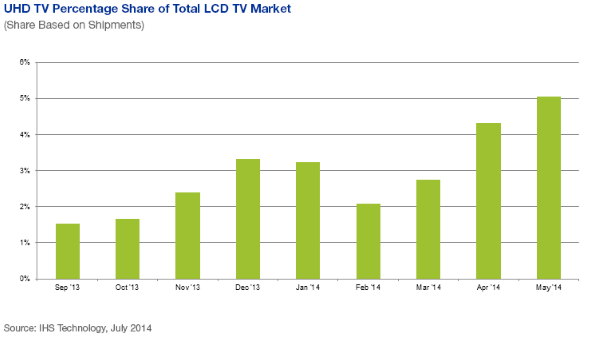 IHS currently categorizes UHD TVs as part of the broader LCD TV market. There are no UHD plasma TVs, though UHD organic light-emitting-diode (OLED) TVs will be available at the end of this year, according to the firm.

Hong noted that market share for UHD TVs in China remains below 10 percent due to higher pricing. He noted that TV makers are planning aggressive UHD promotions to coincide with the country’s national holiday on Oct. 1.

Chinese TV brands, while popular in China, remain relatively unpopular elsewhere in the world, according to IHS. In order to boost market share, Chinese firms will have to improve quality while at the same time reducing pricing, according to the firm.

Overall, about 18.1 flat-panel TVs were shipped worldwide in May, down 6 percent from April but up 7 percent from May 2013, IHS said. Total LCD TV shipments were 17.4 million in May, with plasma display panel TVs accounting for the remaining 708,000 shipments, according to IHS. Plasma sets have been enjoying higher-than-expected sales in 2014 due to promotions related to the World Cup, the firm said, adding that they are now expected to fall dramatically.