So What Are People Really Using Voice Assistants for? 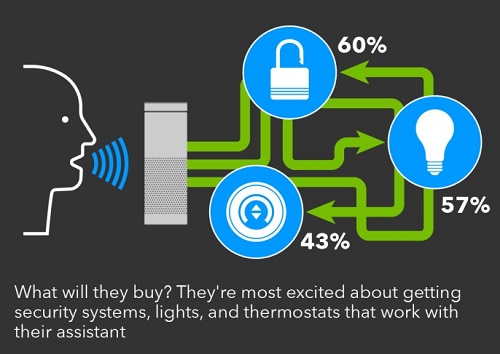 With the variety of voice-activated home speakers on the market with the ability to do multiple functions and control other smart home devices, what are homeowners actually doing with the device?

Smart home software vendor IFTTT (If This, Then That) surveyed 1,500 voice assistant owners to learn what they are doing with the Amazon Alexas, Google Homes and Apple HomePods of the world.

They found that 60 percent of those surveyed used their assistants four or more times a day and 29 percent used assistants seven times a day. 33 percent of all respondents say their kids interact with the assistant tool on a daily basis.

Of the 1,500, a whopping 70 percent had their assistants for less than one year but expect to be using it at least for the next five years. Alexa continues to be the leader with the Echo, Dot or Tap and 8 percent of respondents say they own both an Alexa and a Google Home.

Where do consumers most like to have their voice-enabled home assistants? The majority of those surveyed have it in the living room, bedroom or kitchen.

Maybe the most encouraging aspect of IFTTT’s survey is that those that own voice assistants now are overwhelming likely to buy another connected smart home device in the future (91 percent) and are specifically interested in home security, smart lighting and smart thermostats.