A significant percentage of publicly traded electronics component manufacturers remain unprepared to comply with a new U.S. government mandate requiring the disclosure of conflict mineral use that goes into effect in four months, according to new information gathered by IHS.

The new law, which goes into effect in May, requires publicly traded component manufacturers doing business in the United States to the U.S. federal government any use of so-called conflict minerals sourced from Africa. In a webinar on the subject last month, 42 percent of companies participating companies in a survey professed uncertainty on what to do, or appear unprepared for the May deadline. The companies surveyed included 162 firms from five global geographical regions, with the majority of attendees based in the U.S.

Of the 42 percent of the respondents, at least 22 percent said they were unsure how to go about meeting the new regulations on conflict minerals. Meanwhile, 20 percent admitted they were just in the process of putting a plan together or "determining that approach now."

The protocols on conflict minerals took effect in August 2012 under the Dodd-Frank Wall Street Reform and Consumer Protection Act set out by the Securities and Exchange Commission (SEC), with initial reporting legally required by May of publicly traded U.S. companies.

Twenty-three percent of survey respondents said they use internal resources to catch up, while 9 percent employed a third-party reference database and 2 percent took advantage of supplier tools. The remaining 24 percent subscribed to a hybrid approach that utilized some combination of determining a workable approach, using internal resources and also referring to third-party reference content. 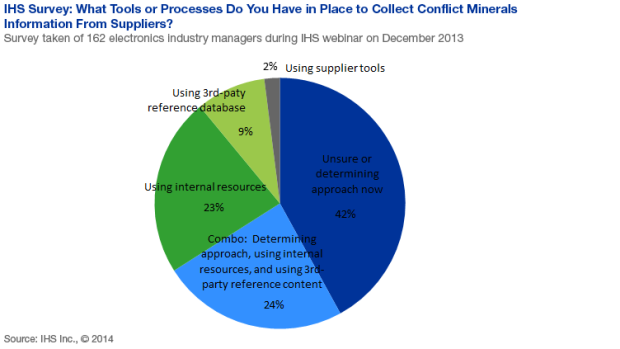 For 30 percent of the respondents, the biggest concern with the looming deadline revolved around fears relating to noncompliance with U.S. regulations. "Losing clients" followed closely behind at 28 percent, and "not having responsible supply chains" was third at 20 percent.

Despite the large number of companies that remain ill-equipped to comply with the new mandate, 50 percent of respondents admitted they could use help in collecting conflict minerals information from their suppliers.

Conflict minerals are raw materials mainly sourced in the war-ravaged country of the Democratic Republic of Congo in Africa, or from adjoining countries on the continent.

The materials include tin, tantalum, tungsten and gold—all of them widely used in the electronics market in products ranging from cellphones to hearing aids to pacemakers. IHS estimates that 15 cents worth of tantalum was contained in every smartphone shipped when Dodd-Frank was originally signed in 2010. As of 2012, that amounted to $93 million worth of tantalum in smartphones.

The new rules affect publicly traded companies in the United States, but electronics manufacturers procure products and materials from all over the globe. According to IHS, the likelihood is high that one or more supply chain partners will require information regarding the sourcing of the four conflict minerals.

Complying with the new SEC rules is expected to be time-consuming and costly. But, according to HIS, the process may not be as complicated as originally projected.

Among the key industries involved in processing conflict minerals, smelters are getting involved in and supporting compliance efforts, according to Scott Wilson, content solution strategist at IHS. "Smelters are a good control point, and this simplifies how far back in the supply chain companies have to go," Wilson said during another webinar on the subject held in early 2013.

Wilson advises companies across the electronics supply chain to be prepared to provide compliance information by May. Even if a business does not use conflict minerals in its products, it has to demonstrate it has conducted due diligence in making that determination, he said, adding that there is existing guidance to assist in the process, including guidelines already in use issued by the Organization for Economic Cooperation and Development.