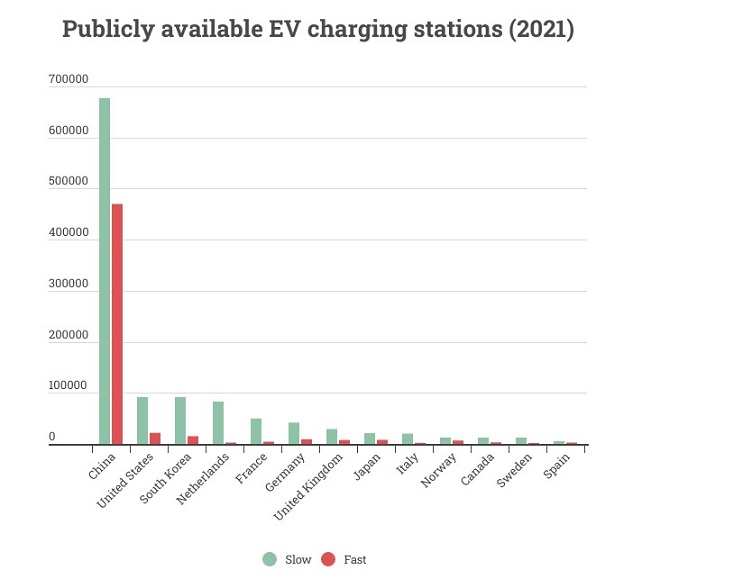 The number of EV charging stations by country. Source: StockApps.com

China, the world’s largest automotive market, has a total of 1.15 million public electric vehicle (EV) charging stations, about 65% of all public EV stations available in the world, according to new data from StockApps.com.

The next closest country is the U.S. in a far distant spot with only 113,527 EV charging stations.

In the U.S., only 21,752 stations are fast charging, meaning 81% of all stations in the U.S. have only slow charging capability.

However, the U.S. is ramping up its EV charging station capabilities with the Biden Administration pledging to build 550,000 new stations to support the transition of automotive OEMs to electrification. This will include money from the Infrastructure Investment and Jobs Act that was passed that will give federal funds to every state to expand networks of EV charging.

The Texas Department of Transportation (TxDOT) revealed its five-year plan to install a network of EV charging stations including a 50-mile spacing for DC fast chargers along interstate corridors and EV stations 70 miles apart in rural counties.

General Motors, one of the largest automotive OEMs in America, plans to install up to 40,000 Level 2 EV chargers across the U.S. and Canada beginning this year.

South Korea is a close third despite having a minor population compared to the U.S. The country has 106,701 public charging stations including 15,067 with fast charging capability.

Another country that stands out in Europe is Norway with just 19,278 charging stations. However, the nation has invested more in fast charging stations with 35% of its total public stations featuring fast-charging capabilities.