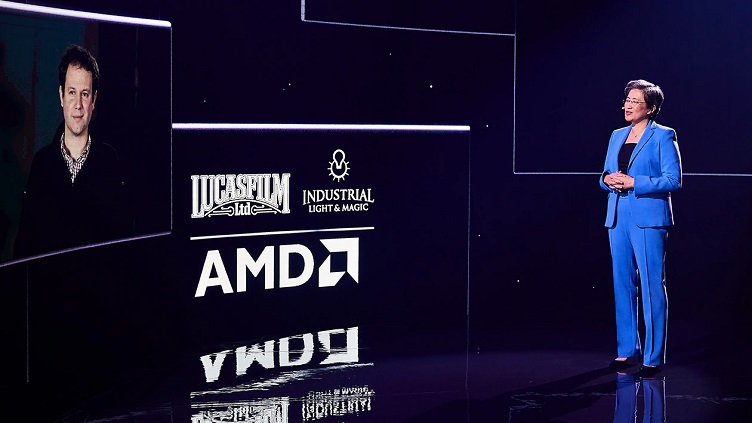 Virtual keynote addresses were the new normal at the all-digital CES 2021 with video highlights and interviews with people working remotely such as the AMD address seen here. Source: AMD

Considering CES is traditionally a venue for seeing and experiencing new technology, the show was naturally scaled back this year due to its all-digital format.

The Consumer Technology Association (CTA), the organization that operates the event each year, said that under 2,000 virtual exhibitors participated in the tradeshow. While this made it the largest digital event in history, there were about 4,400 exhibitors that participated in the in-person show last year — making the digital show a huge departure from traditional shows.

The good news is that the show's all-digital format was far more accessible to audiences globally than ever before. No longer did consumers or press need to be in attendance to witness the latest and greatest in technology innovation. Instead, everything could be live streamed and seen by far more people than just those attending in person.

Unsurprisingly, technology to cope with the continued lockdowns and social distancing mandates because of the COVID-19 pandemic took center stage at CES 2021.

Not only did companies roll out new and different ways to combat the coronavirus (as well as other potential viruses in the future) but no one could avoid talking about the virus and its impact on every aspect of life. And with good reason as the death toll in the U.S. has climbed past the 390,000 mark.

While products for keeping a clean home or office appeared at last year’s event, with a concentration on air purifier and robotic vacuum technologies, this year's show saw multiple robots built with UV-C to eliminate the virus. Additionally, new masks for keeping people safe in public and contactless everything were heavily featured at the tradeshow.

Shopping apps and translation apps for hotels emerged as well to help people avoid other people as much as possible. For a show that is normally filled with tens of thousands of people jam packed into a convention center, it is surreal to see the debut of technology designed with the purpose of helping people to avoid each other in public.

Some companies did a better job at promoting their wares than others. Samsung, LG and the multitude of TV manufacturers have generally been proactive in pushing products prior to the event in previous years. This year was no different as these companies announced a slew of products before the show and then offered virtual tours and more product introductions during the actual week of the show.

However, companies that do not have the resources that these electronic giants do were forced to roll out announcements or plans in sparse fashion, likely failing to garner the attention that a normal CES would have brought. For smaller companies and startups, this was even more of a challenge. Without the resources to get the word out and no visual cues to bring customers and interested parties into a booth, much of these startups were lost in the fray more than usual — and that is only if those companies had any resources to participate at all after nine months of lockdowns, layoffs and lost revenue due to COVID-19.

Interestingly, some larger companies reduced their presence or even opted to not participate at all during the show. Amazon and Facebook/Oculus decided not to officially be at the show and Google had a limited presence, despite having had an entire ecosystem at CES 2020.

Likewise, some companies put everything out on Day 1 and did little else the remaining days of the event. Others, like Intel, had meetings on the regular with staff working on live video calls each hour to answer questions, but this was rare. Additionally, automotive companies that typically use CES to post their latest vehicles or interesting prototypes were noticeably absent. Although some cool car tech remained.

In a traditional CES, analysts attend the show for one of two reasons: to cover the next generation of technologies, new gadgets and gear or to serve as a participant in a panel discussion about trends in the electronics space.

At the all-digital CES 2021, market research analysts were called on to be content for companies that otherwise may not have had something to talk about. Furthermore, to attract attention, analysts were used in many virtual press conferences to provide color and background about technology and trends in given spaces.

Given the nature of the tradeshow this year, Zoom and Microsoft Teams were used as the main source of communication between visitors and exhibitors — much the same way that the technology has become the communication vehicle for the remote workplace.

And much like the challenges encountered in the workplace with the technology, those same challenges manifested during CES with problematic connections and those who forgot to mute their microphones.

Those that chose to create their own website and user interface to share their announcements were faced with similar challenges — high traffic or a wonky user interface that made navigation extremely difficult.

That said, CTA’s own website was extremely easy to use and the live streams of the keynote addresses and presentations were smooth — something that may benefit the company moving forward in future events.

No parties, no fluff

Obviously, without attendees there were no fabulous parties with celebrity entertainers or glamourous swag bags handed out liberally. At a traditional CES, companies set up parties and elaborate concerts or events to get recognition and attention. Also missing was the tradeshow floor experience where swag was abundant with T-shirts, pens, free gear and more handed out generously.

If anything at all was mailed to various attendees, it was in short supply and toned down. While some entertainment options were live streamed — such as a performance from Billie Eilish — it was rare.

Hopes are that an in-person CES will return in the future, maybe even next year. However, it is also extremely likely that the establishment of digital means for communicating with vendors, engineers and attendees will remain to reach more people in different ways. Live streaming of conferences, keynotes, events and entertainment will likely continue and even expand in reach for those who may not be able to attend live or choose not to in the face of a new reality.