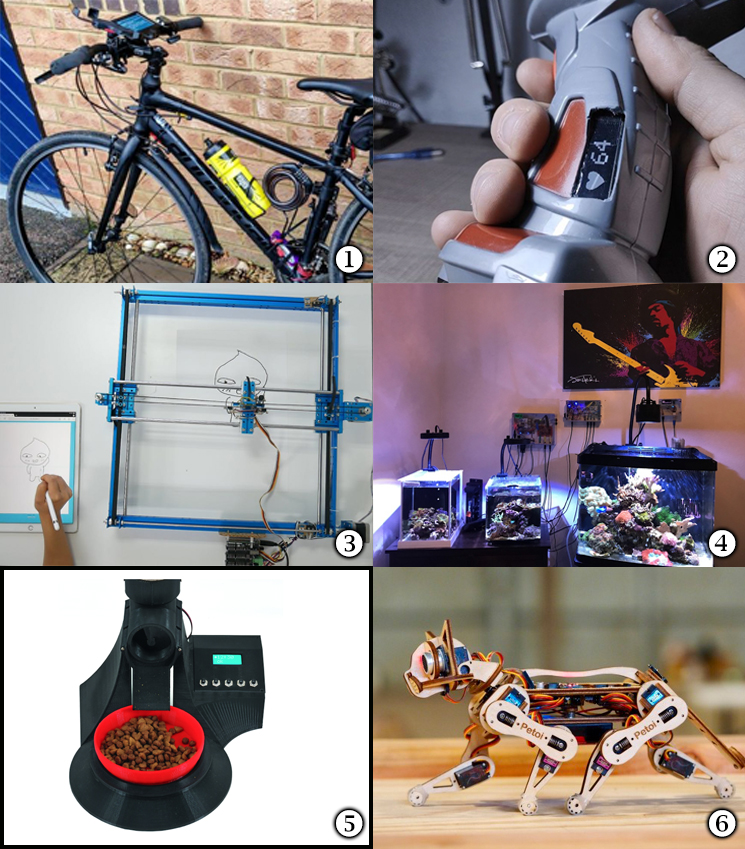 Makers often get inspired to create projects that dazzle over the holidays, high-tech Halloween costumes to synchronized Christmas lights. Now that the holidays are over, however, a little push may be needed to avoid falling into a January slump.

Not to worry: Here’s just the tip of the iceberg on the coolest ideas making the rounds on some of our favorite maker sites.

Cycling is a great exercise for those who’ve made a New Year’s resolution to get into better shape. While it may be on the early side to start hitting the roads, this Raspberry Pi-powered bike dashcam could serve as an ideal, safety-conscious way to prepare for cycling season. Maker Alex Eames set up the device as a rear-view mirror; it also records both front- and back-facing views that could prove invaluable in traffic court. Eames also live-blogged his process in a way that allows a reader to follow his trial-and-error, and gain an appreciation for how the design and engineering came together.

While we’re on the subject of exercise, there’s also this Arduino-based handheld heart rate monitor that an inventive sci-fi fan who goes by the handle “Taste the Code” fashioned out of a spinning toy component. The device was aptly designed with a Star Trek tricorder theme in mind, although a reader was quick to point out that it actually looks more like a phaser. Either way, though, Taste the Code notes that the project is very basic and easily modifiable, making it a great starting place for those new to maker-style experimentation.

The winter months are also an ideal time to pursue indoor hobbies, of course. For those who like to doodle away a few hours sketching on their tablets, here’s an impressive Arduino-based drawing plotter designed to transfer those drawings onto an actual canvas — as they are created, in real time.

If water dwellers that simply swim around an aquarium are preferred to those that are trained to fight crime, consider reef-pi for taming the tedious tasks of tank management. The DIY system is designed to automate pH, chemical and water level monitoring, along with managing temperature, light and power. The name is a clue to the fact that it is designed for the most challenging types of tanks: saltwater aquariums with live corals, also known as reef aquariums. But aspects of the system can be used for more basic tank setups, as well.

For those who prefer their pets on the furrier side, the FelixMatic might be a better fit: it’s a DIY programmable food dispenser for cats (and small dogs) built with an Arduino Uno and a Real Time Clock Shield.

Pet-loving makers don’t need to stop at automating management tasks for their cuddly companions: even the pets themselves can be mechanized, like a certain robot cat named Nybble that’s recently been fully funded as an Indiegogo project. According to its makers, the kitty is just the beginning and the design can be scaled up to make larger robot pets as well — even a horse or an elephant.

And that’s just the beginning, indeed. The year has just begun, and the possibilities are endless. Got a great project you want to share with the Electronics360 community? Tell us in the comments below.