Programmed to create a flame-like effect with the LED strip, this Arduino Nano board is the heart of the piece. Image credit: Tony Pallone/Electronics360.

I had hoped my recent article, Happy High-Tech Halloween, would inspire some readers to create some inventive costumes. But I never anticipated the level to which Dan -- one of my colleagues, who writes under the handle frankd20 for our CR4 discussion site – would take it.

Dan decided to create a pitchfork to complement an existing devil costume he would wear to the office Halloween event. Actually, it wasn’t so much that he decided to create it as that he had an idea about how he could create it, if only he had the time to invest -- but he didn’t think that he would. Next thing I knew, however, he was working away in our little lab, turning the idea into reality piece-by-piece.

It wasn’t simply that it was a pitchfork. You can pick one of those up for a few bucks any place that Halloween costumes are sold. No, Dan wanted to create what appeared to be a pitchfork made of fire.

Lest you think that the rest of this article will describe something that “should never be attempted at home,” let me reassure you that the flames aren’t real. But the effect – well, you be the judge. It is, in my opinion -- despite its being created with readily-available, low-cost components that even a techie neophyte like me can understand -- one of the most impressive pieces of technological wizardry I’ve ever seen. 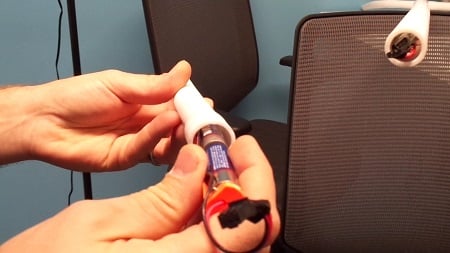 Dan started with a hollow length of bendable PEX pipe, a strip of individually-addressable LED lights, and an Arduino Nano board hooked up to a power supply. After finding a freely-downloadable bit of code for controlling the lights, all the basics were in place. The lights were threaded into the pipe; the board was hooked up to the lights; code was downloaded to the board and voilà: a flame-colored light show, incorporating both reds and related colors for added realism, could be seen as it traveled through the translucent pipe.

For my part, I was already impressed. Dan could have stopped there and just explained the rest of what he would do if he had more time. In fact, I think he considered doing exactly that. But the project’s early promise had hooked him.

More PEX pipe was used to fashion the trident-style top, and he even went so far as to create pointed prongs with a 3D printer. The power supply he’d used in the lab was replaced with three AA batteries that could be tucked neatly into the bottom of the pipe, and hooked up to a switch. He experimented with code modifications that would impart different “flame” effects, ultimately settling on one that -- in the dark, at least -- looked exactly like what you’d imagine a little bit of hellfire would look like if it were to manifest itself on Earth. Once set, the code wouldn’t need to be touched again. Pointed prongs to be attached to the trident were created with a 3D printer. Image credit: Tony Pallone/Electronics360.

Mission accomplished: a jaw-dropping costume piece that could be switched on and off at will. I’m willing to bet my soul that this will make Dan’s devil ensemble a surefire lock for the costume contest. Stay tuned.