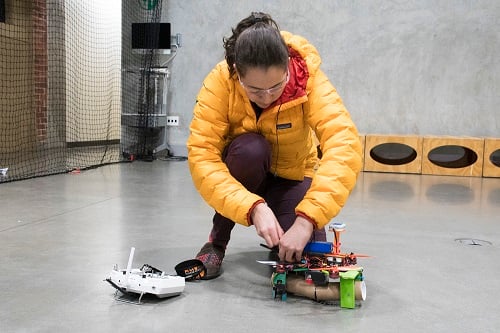 An engineering student programs and builds a drone in the Lentink lab. Source: Stanford University Using unmanned aerial vehicles (UAVs) for goods and parcel delivery is heating up quickly across the world with numerous pilot projects emerging to test the viability of using drones as a potential last-mile option to save on costs and provide better consumer service.

At Stanford University, the Aerial Robot Design engineering course has taken this emerging market to its engineering students by allowing them to build and test quadcopters that are outfitted with custom delivery mechanisms. The results were drone deliveries that carried payloads such as cupcakes, dry erase markers, emergency supplies and a burst of confetti.

“Most of our students have never designed anything that has to take to the air and fly at all,” said Eric Chang, a graduate student and teaching assistant in the Lentink lab at Stanford. “This is their first step into considering the factors that go into designing an aerial robot.”

Two types of drones were created — rotor-based and winged — and then applied to making delivery projects reliable, realistic and consumer-friendly. The course teaches skills to the engineering students such as robotics, aerodynamics, user-centered design and systems engineering — all skills that can be used beyond drone design.

While other research projects into drone technology have focused on programming the UAVs to fly through densely populated areas or obstacle avoidance, the Stanford class focused on what type of delivery drone would work in the real world.

“One of the first things we learned in this course is you really can’t get much range at all with quadcopters,” said Luke Asperger, a graduate student in mechanical engineering. “Whereas, if you got that wing, you’ve got a lot of lift. And the actual cruising part of the flight doesn’t take much power, so you can go pretty far.”

Specifically the class focused on designing drones that could take off vertically like a quadcopter but then transition to winged flight and land vertically to perform a delivery. Students used computer simulations to optimize different aspects of the drones they were creating such as wing shape and rotor size as well as aerodynamically optimizing wings with airfoil design techniques.

Along the way, students were trained in how to build, program and fly quadcopters and by the end of the course flew the drones in the air autonomously between a set of GPS waypoints. The tests mimicked a delivery mission from a set destination on campus to another destination.

Changing the type of drones used for delivery could change how far the drones could be capable of delivering goods or parcels to consumers opening up a realm of new potential for the emerging market.

Over the past year or so, the testing of drones used for delivery has intensified including Airbus testing a cargo program in Singapore, Matternet’s Swiss delivery drone system for medical supplies, a food delivery service in Iceland from Flytrex and AHA, medical delivery via drone in Tanzania from Zipline, parcel delivery by ZTO Express in China, beverage delivery at Estonia public beaches by Cleveron and even hot dog delivery by an Oscar Mayer Wienerdrone.