Ashok Bindra
To simplify the task of evaluating enhancement-mode gallium nitride (eGaN)-based power FETs, or eGaN FETs, for multi-mode wireless power-charging systems, Efficient Power Conversion (EPC) has unveiled a complete demonstration kit compatible with the two major wireless power- charging standards. This kit, labeled EPC9121, supports both the AirFuel Alliance Class 2 based on the magnetic resonant technology, and the Wireless Power Consortium Qi (A6) built around inductive coupling technology. In essence, it includes a source or a transmitter board that powers a receiver built using either standard. 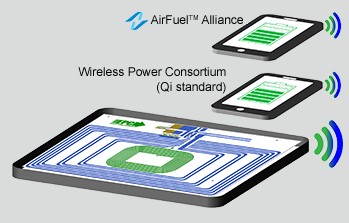 In the AirFuel resonant mode, the EPC9121 system operates at 6.78 MHz with the amplifier circuit configured for ZVS operation. In this mode, the system can deliver up to 10 W of power into the source coil. Likewise, in Qi (A6) inductive mode, the system operates at 165 kHz with the amplifier circuit configured for hard-switching operation and can deliver up to 5 W of load power into the transmit coil. In short, the kit contains all the passive and active components, including 100 V eGaN FETs and coils, needed to build and evaluate the multi-mode wireless power-charging system.

Precisely, the EPC9121 demonstration kit comprises four components. These include a source (transmitter) board EPC9511, multi-mode source (transmit) coil, AirFuel Class 2 compatible receive coil with rectifier and DC output, and Qi-compatible receive coil with rectifier and DC output. Assembly details, including schematic and other operational and measurement procedures, are provided in the development board’s quick-start guide. Priced at $907.20, the multi-mode demonstration kit is available from Digi-Key.