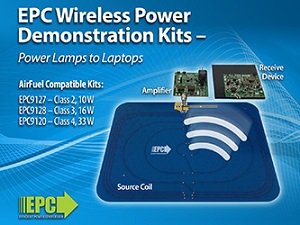 These systems, coupled with previously announced EPC9120, 33 W class 4 and the EPC9121 multi-mode kit capable of operating to either an AirFuel Class 2 standard with a category 3 device or a Qi (A6)/PMA standard with a compatible receiving device provide a full range of wireless power demonstration kits to allow for complete, wide-spread implementation.

The company now covers a wide range of the AirFuel resonant technology standard with the introduction of these demonstration kits. The popularity of resonant wireless power transfer is increasing rapidly, with end applications evolving quickly from mere cell phone battery charging, to the powering of large surface areas where handheld tablets, laptops and computers – and, soon TV sets, lamps and other electrically powered appliances – simultaneously anywhere on the surface.

The demonstration kits are designed to simplify the evaluation process of using eGaN FETs and ICs for highly efficient wireless power transfer. The kits, operating at 6.78 MHz (the lowest ISM band), utilize the high frequency switching capability of Efficient Power Conversion Corporation gallium nitride transistors to facilitate wireless power systems. The efficiency of these systems is about 87 percent from input to the amplifier to the output of the receiver (end-to-end), and with future improvements in architecture and GaN IC technology this number can reach into the 95 percent range.

• A Source Board (Transmitter or Power Amplifier) EPC9510

• A Source Board (Transmitter or Power Amplifier) EPC9509

The source (amplifier) boards included in these kits are highly efficient Zero Voltage Switching (ZVS), Class-D amplifiers configured in an optional half-bridge topology (for single-ended configuration) or default full-bridge topology (for differential configuration) and include the gate driver(s), oscillator and feedback controller for the pre-regulator. This allows for compliance testing operating to the AirFuel standard over a wide load range. These amplifier boards are available separately as EPC9509 and EPC9510 for evaluation in existing customer systems.

The receiving device boards include the Category 3 EPC9513 (5 V, 5 W) and Category 4 EPC9515 (5 V, 10 W) receiving device boards included in the wireless power demonstration kits are also available separately for customers that have their own source boards or for those who want to design wireless power systems powering multiple devices simultaneously. These boards allow customers to bring various wirelessly powered consumer electronic products quickly to market.

With the wide range of efficient receivers that can be used to power anything from lamps to laptops to tablets, while remaining compatible with cell phone charging, the system designer now has all the tools needed to create an entire wireless power, large area, efficient system.