The ramp up of smart cities worldwide is leading to a rise in the number of unit shipments for smart city devices, or devices that are Internet-connected and used in smart city projects, according to a new report from market research firm IHS.

The number of smart city devices is forecasted to grow to 1.2 billion by 2025, up from just 115.4 million in 2015, IHS says. Regionally, Asia Pacific will take the lead with more than half of these device shipments by 2025, in contrast to 2015 where North America, Europe and Asia Pacific each received about one-third of the unit shipments. 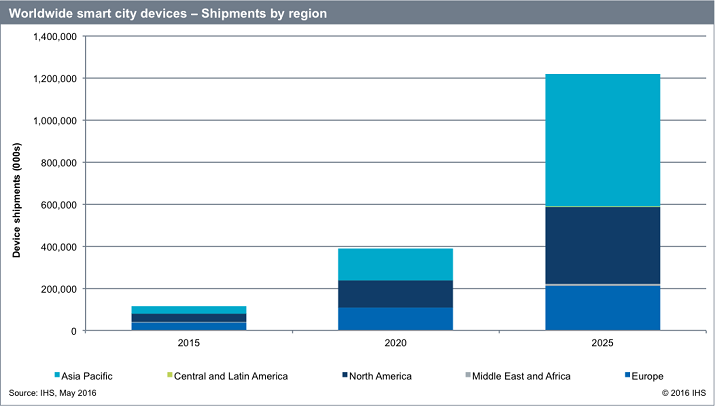 After Asia Pacific countries, the U.S. represents the largest potential for smart city technology growth due to the number of cities and metropolitan areas in the country, IHS says. Smart city growth in the U.S. was helped by a recent initiative from the government providing more than $160 million in federal research funds to bolster the smart cities market in the country.