Nicolette Emmino
Researchers from ETH Zurich and the University of Bologna have developed an open-source microprocessor system that maximizes the freedom of other developers to use and change the system. Open-source hardware products are abundant – think microcontroller boards like Arduino and Raspberry Pi—but these boards are based on commercial chips, whose internal structure is not open-source.
“It will now be possible to build open source hardware from the ground up,” said Luca Benini, professor at ETH Zurich, who worked on the project. “In many recent examples of open-source hardware, usage is restricted by exclusive marketing rights and non-competition clauses. Our system, however, doesn’t have any strings attached when it comes to licensing.”
The team made the processor compatible with an open-source instruction set – RISC-V – developed at the University of California in Berkeley, which makes the arithmetic instructions that the microprocessor can perform also open source. 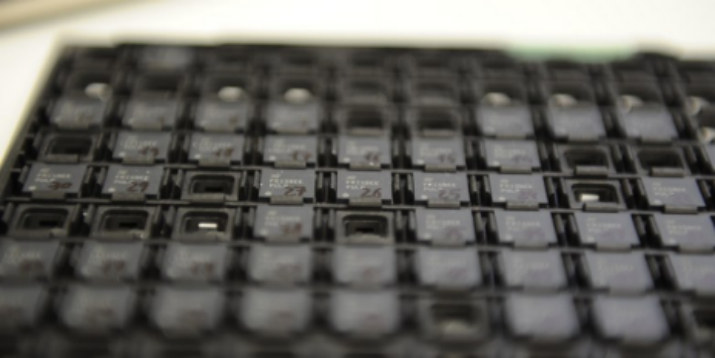 A series of PULP microprocessor chips on a tray. (Image Credit: ETH Zurich / Frank K. Gürkaynak)
The processor is called PULPino and is designed for battery-powered devices with extremely low energy consumption, such as chips for small devices like smartwatches, sensors for monitoring physiological functions, and IoT sensors.
Currently in the lab, Benini is using the PULPino processor to develop a smartwatch equipped with electronics and a micro camera that can analyze visual cues and then determine a user’s location. Benini and the team are developing the smartwatch with the intention that one day it could control home electronics, however, it has been a challenge to accommodate all of this on a tiny space on a microprocessor with only a few milliwatts of power since the computing capacity for the image analysis must be sufficiently large.
Benini is also using PULPino in other research projects in conjunction with Swiss and European research institutions. “Until now, such research projects came about mainly as a result of personal contacts, and the partners had to negotiate a separate license agreement for each project. PULPino is now more easily available. We hope that there will be more collaborations in the future and that these will also be easier,” said Benini.
The scientists want to work with other project partners to jointly develop academically interesting extensions to PULPino, which would also be open-source, allowing the number of the hardware’s functional components to increase.
PULPino also has the potential to benefit smaller European corporations. “The production of microchips has become cheap in recent years because semiconductor manufacturers have built up large production capacities that they must use,” said Benini. However, the design process proves to be expensive for SMEs, especially when it comes to designing a complex chip from scratch. With an open-source piece of hardware like PULPino, new partnerships could be formed within the industry to develop novel chip components.