Murray Slovick
To say that Wi-Fi is popular is to grossly understate its success: Cisco has predicted that by 2020, Wi-Fi will connect 1.7 billion devices (Source: Cisco VNI Mobile, 2016). By 2025 growth of wireless data traffic will mean that the radio frequency (RF) spectrum Wi-Fi occupies—a Wi-Fi network makes use of radio waves to transmit information across a network-- will not have sufficient resources to cope with demand. What to do?

While Wi-Fi uses radio waves, Light Fidelity (Li-Fi) employs modulated visible light from a light-emitting diode (LED) to transmit data. Li-Fi technology was originated in 2011 by Professor Harald Haas of the University of Edinburgh who coined the term Li-Fi during a TED Talk in 2011. Haas pointed out that since the visible light spectrum is 1,000 times larger than the entire 300 GHz of radio, microwave and mm wave radio spectrum, there is a big untapped reservoir of resources for wireless systems.

With light there is no concern about being limited to a set of radio frequencies. Li-Fi works by taking advantage of the characteristics of an LED. Basically, when a constant current is applied to an LED light bulb a constant stream of photons are emitted from the bulb which is observed as visible light. But because an LED light bulb is a semiconductor light source, the constant current of electricity supplied can be adjusted up and down and at extremely high speeds. Indeed, by affixing a microchip to a LED light bulb it can be made to flicker millions of times a second, a bit like high-tech morse code, and at a rate so fast that it is not visible to the human eye.

This modulated light can be detected by a photo-detector device and converted back to electrical signals creating a rapid stream of binary code, which, in turn can be fed to a web provider to bring users online.
As such Li-Fi combines two essential functions--illumination and communications—a cost-saving measure that makes more efficient use of existing infrastructure by using common household LED light bulbs as wireless routers. 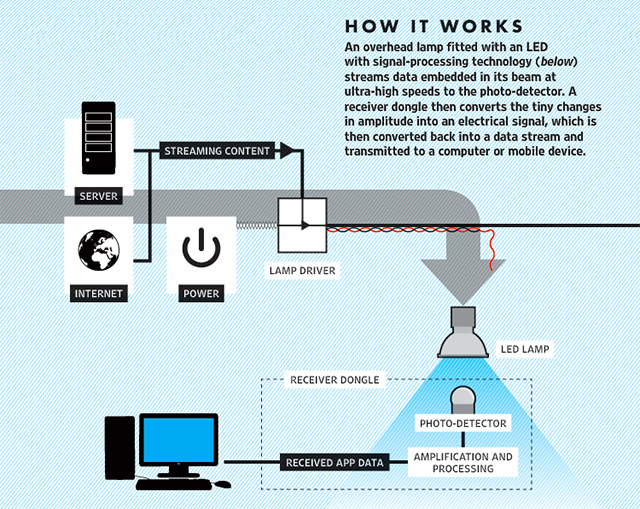 The modulation methods employed to bring this about are similar to those used in low-cost infra-red communications devices such as
television remote control units. Infra-red communication is limited in power due to eye safety requirements, whereas LED light bulbs have high intensities and can achieve very large data rates. In fact, scientists have demonstrated in a lab that they can transmit information at more than 100 Gbps with laser LEDs. Outside of the lab, in a real world test India-based Velmenni placed Li-Fi components in offices and industrial environments in Tallinn, Estonia, and reported data transmission at 1 GB per second.

While Li-Fi is clearly faster than traditional Wi-Fi, there have been widely published reports on the Web that it is “100x faster than Wi-Fi.” Not so. The latest Wi-Fi standard (IEEE 802.11ad--otherwise known as Wi-Gig) operating in the 60 GHz frequency band supports data rates of 7 Gbps. For Li-Fi to be 100 times faster it would have to achieve 700 Gbps and that has not been achieved. The type of light source (large LED, small LED or laser) directly impacts the speed that can be achieved by a Li-Fi solution. Phosphor- coated white LEDs, which are mostly used in all commercial lighting devices, can deliver about 100 Mbps and the more expensive red, green, blue (RGB) LEDs can deliver anywhere from 3 to 5 Gbps. Note that this is still fast enough for a typical HD movie to be downloaded in seconds.

Wi-Fi does have its advantages. By using radio waves Wi-Fi signals can pass through walls and ceilings. Li-Fi signals cannot pass through walls; in order to enjoy connectivity in each room at home, Wi-Fi capable LED bulbs will need to be placed throughout the house. On the other hand, an intruder or hacker, positioned outside of a building can still tap into Wi-Fi data communications that leak from inside the building. Data communicated via Li-Fi is inherently more secure in that it can only be accessed where there is LED illumination. Put another way the would-be hacker would have to be in the same room with you to tap into the network.

Li-Fi requires the LED lightbulb to be on at all times to provide connectivity, so the lights will need to be on during the day, eating into the efficiency advantage LEDs enjoy over traditional lighting sources. What's more, Li-Fi does take a hit when it comes to public networks because of the lack of LED light bulbs outdoors. In very bright daylight, the receivers also wouldn’t be able to distinguish the modulating light waves.

One disadvantage of traditional Wi-Fi routers is that multiple devices in a room can interfere with each other. But there can be tens or more Li-Fi light bulbs in a room without interference. Wi-Fi also creates Electromagnetic Interference (EMI), known to interfere with airplane instruments and equipment in hospitals. Li-Fi uses light instead of radio waves and does not create EMI.

After four years of research, in 2012 inventor Haas set up a company called pureLiFi to market VLC technology. The company developed a ceiling unit called Li-Flame capable of 10Mbps downlink and 10Mbps uplink communication with a range of up to three meters using standard LED light fixtures. pureLiFi’s has now evolved the Li-Flame into the LiFi-X, a new generation of drivers and receivers that were introduced at the 2016 Mobile World Congress in February. LiFi-X (see Fig. 2 below) provides an access point that connects to any LED light. It offers full duplex communication with a 40Mbps downlink and 40Mbps uplink as well as full mobility and multiple users per Li-Fi Access Point. 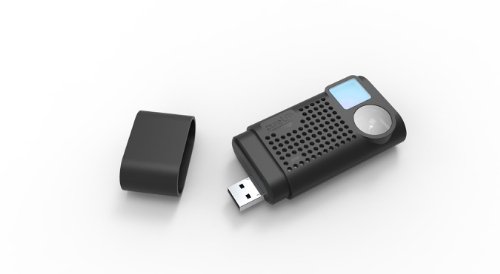 pureLiFi, and Lucibel, a French company that specializes in the design of new-generation lighting solutions based on the LED technology, are in the process of co-developing and marketing Europe’s first, fully industrialized Li-Fi luminaire. The first installation of this Li-Fi luminaire will be at the Sogeprom’s headquarters in the La Defense section of Paris. Sogeprom, a subsidiary of Societe Generale and a major property developer, is looking at Li-Fi to provide the next generation of wireless connectivity for its customers.

Looking ahead published reports suggest that Apple may build future iPhones with Li-Fi capabilities. A Twitter user found that within Apple’s iOS 9.1 code there were references to 'Li-Fi Capability' alongside other hardware and software capability declarations, hinting that Apple may integrate Li-fi with iPhones in the future. Other organizations known to be exploring Li-Fi include Disney Research and the Berlin-based Fraunhofer Research Institute.