A pair of now-familiar buzzwords were once again among the jargon being bandied about the halls of this year's Mobile World Congress: spectrum crunch and 5G.

The two go hand-in-hand. Globally, the communications and mobile industries are faced with ongoing concerns about the potential lack of sufficient wireless frequency spectrum for an increasing number of devices, and how governments will allocate radio frequencies. Research, development and testing of super-fast 5G systems, the next-generation mobile network, is still underway, but it is generally agreed that the first commercial versions of these systems should come online around 2020.

Although most of the 5G discussion at the mobile industry's main event centered around Wi-Fi, LTE and femtocell advances, a new twist was layered into the discussions. The idea of Light Fidelity, or Li-Fi, has people thinking about a different part of the electromagnetic spectrum that's available for data transmission — light.

Li-Fi, a term coined during a 2011 TED talk by Harald Haas, chair of mobile communications at the University of Edinburg's School of Engineering and chief scientific officer at pureLiFi Ltd., uses visible light to transmit information. The overriding concept, which is still more a lab experiment than commercial option, is to use smart LEDs — and existing lighting infrastructure — to create a ubiquitous, localized, secure wireless network to support increased numbers of devices connecting to the Internet.

"There is a distinction between Li-Fi and general visible light communication," said Nikola Serafimovski, director of product marketing at pureLiFi, which showed off its Li-Fi product, Li-Flame, at MWC.

Light-based networking could make sense in the bigger scheme of things several years from now, at least from an infrastructure standpoint.

"If you really want your higher data rates and 100Mb/s in a room, you need many Wi-Fi access points, one in every room," said Haas. "Why not just use the lights that are in the rooms? You can dim the LEDs, and they would be off for the eye but still emit enough light for the receiver in the mobile device."

LEDs, of course, are gaining popularity, and that could help usher in Li-Fi.

The downside is that wide-scale Li-Fi adoption could be decades away as it will take time to equip buildings and homes with smart LED bulbs and fixtures. It's estimated that less than 1 percent of buildings will use Li-Fi by 2020, according to the IHS report Visible Light Communications and Indoor Positioning.

Even so, part of what makes Li-Fi appealing to the cellular industry, even in its early developmental stages, is the promise of a more secure (unlike radio signals, light does not go through walls) and very fast network.

"The reason why cellular communications have become better and better is because the cell radius has shrunk from 35 kilometers in 2G to, in 5G, probably about 50 meters. Now, imagine an indoor environment where you have a light source every one to 10 meters," said Haas. "There's already an existing infrastructure that could supply a dense network of access points in an indoor environment. If we can use that infrastructure to develop and employ future wireless networks that would solve many problems and create new opportunities, for example, with respect to the Internet of Things." 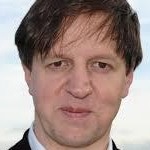 Harold Haas"We have now shown research that indoor data densities, or the number of bits you can transmit in a square meter, can be improved by a factor of 1000. That's a headline figure we have shown," Haas added. “So if a room of five by five meters would now give you in total 1Mb/s shared among different users, you would now have 1Gb/s that you could share among users. If there were 10 people in that room, in the first case, there would be 100Kbit/s [per person], and in the case now, that would be 100Mb/s. That creates a fundamental difference in respect to the user experience."

From a product development standpoint, there is still work to be done.

“With Li-Fi we have this ability to push through data rates that you can't even imagine," Serafimovski said. "To get that bandwidth with RF would be remarkable. For data rates, yes, right now, I would argue, Wi-Fi is quicker compared to our Li-Flame product. Our Li-Flame product does 10Mb/s in both directions, so it's quite modest. We're looking to improve on that significantly as the product and technology matures.

"If you think back, ADSL started with 54 kilobits, and that was considered a big improvement," Serafimovski said. "This is the same trend. That first ADSL modem, that's what the Li-Flame is today."

Outside the Visible Spectrum

There's another group taking a different approach to light-enabled data transfer and networking. The Li-Fi Consortium bases its optical wireless technology research and development on infrared light and with laser-supported Li-Fi.

One use model the group is focusing on is replacing fiber cable deployment, reducing associated costs of providing network access points in buildings, said Walter Kraus, chairman of the Li-Fi Consortium.

"With a 20-meter beam, you can bridge long distances, go through the windows from outside or go through the ventilation systems to deploy the network to different rooms or parts of the building," he said.

Additionally, the organization is developing a matchbook-sized router that can be used to quickly create ad-hoc mobile networks. Eventually, the hope for both the Li-Fi Consortium and pureLifi is for Li-Fi to be integrated on the printed circuit board, much the same way embedded Wi-Fi solutions evolved and are standard in most consumer devices sold today. For now, though, much of the product development is on external devices that connect to the handset or laptop via USB.

"This gives the whole meaning of networking a different touch that is not existent today," Kraus said. "Right now, you can't take your router with you. With the devices we're working on, they don't have to be installed anywhere. If you have two or three around, you can just start networking."

As mentioned earlier, the big advantage, however, is speed.

"When we talk about speed, there is an issue that is quite often overlooked," Kraus said. "When you buy a normal Wi-Fi router and it is said to transfer 100Mb/s, in reality you are transferring effectively only 40Mb because 60Mb disappear in what's called bit error rates."

Where Li-Fi Fits in the Wireless World

Whether Li-Fi will compete or complement existing Wi-Fi networks may well depend on where you sit in the high-tech ecosystem. Haas anticipates Li-Fi being pushed and pulled into the mainstream by two main industries. 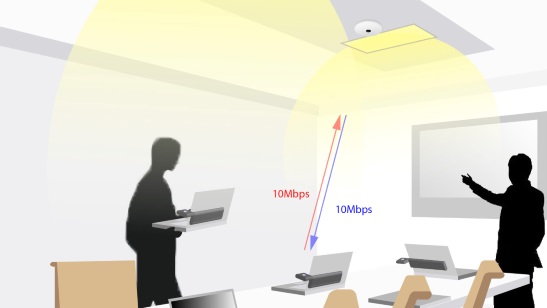 PureLiFi&rsquo;s Li-Flame is billed as a high-speed wireless network solution that uses LEDs and existing lighting infrastructure to transmit data. "We also see that Li-Fi will be pushed into the radio communications and cellular industry," Haas said. "That industry is trying to hold onto radio as long as it can because they have made billions of dollars of investment into radio technology. There will be a push into that industry to convince them that this new electromagnetic spectrum is a viable solution for many of their problems."

Li-Fi could also be used in military or government environments, where security would be a primary concern, or in airplanes, hospitals or industrial sites, where Wi-Fi cannot be used because of interference-related issues linked to radio waves, experts say.

"Light doesn't travel through walls, so if you're looking for a very secure environment, Li-Fi would be harder to hack from outside," said Jamie Fox, principal analyst for LEDs and lighting at IHS Technology. “Another thing with Li-Fi is that you avoid the interference and overcrowding of the radio frequencies. It's also a lot easier to find new frequencies for Li-Fi."

Retailers may also see its potential as a way to collect consumer data via smart store lighting, and university campuses where large amount of data are uploaded and downloaded could benefit as well. 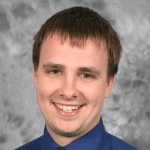 Jamie FoxWhile there is considerable potential, there are also many yet-to-be-defined opportunities. "It's difficult to forecast growth for such a young field," Fox said. “The projects are still be tested, and there's nothing yet being done on a big scale."

Also, there are a few short-term disadvantages to contend with in terms of costs and convincing people that Li-Fi benefits outweigh what is currently available over existing Wi-Fi platforms.

"Wi-Fi is cheaper today. Billions of units are being printed on silicon every day. We can't compete with that," admits Serafimovski. "We are producing very low-volume quantities of our current product that we're selling to customers, and we're over subscribed. So our product is expensive because we don't have volume yet. That's okay, that's natural."

Similarly, although consumers quickly get used to transferring files at faster rates with each new networking improvement, there may not yet be a compelling argument in the short-term to make a substantial infrastructure investment and switch over from Wi-Fi, said Fox.

And, even if Li-Fi delivers on its high-speed data pledge, it's a last-mile type of connection, and overall connection speeds will still be dependent on how fast the entire network is in delivering information from one point in the world to another via the Internet, said Fox.

Adding Li-Fi capability to a building will enable faster data transmission within that building. But, the process of pulling data off a server in, say, Brazil via the Internet is not necessarily going to be any faster, Fox noted.

"It still has to travel all the way from Brazil to your building and Li-Fi system," Fox said. “Li-Fi will be more useful to people who have to transfer large amounts of data internally within an area."