Consumer interest in small sized notebook products—such as the popular Chromebooks—is driving down unit shipments of 15-inch displays used in conventional notebooks, according to a new report from IHS. 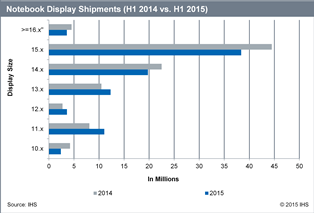 “Thanks to affordable prices, and a completed ecosystem with a host of hardware and app choices and a user-friendly cloud environment, Chromebook has expanded its customer base from small and medium-sized businesses and the education market to general users,” says Jason Hsu, senior analyst for large displays at IHS.

Chromebooks have expanded from the U.S. to emerging countries, where local brands are launching Chromebook product offerings. “There are also more products set to debut in the 12-inch range, thanks to the success of the Microsoft Surface Pro 3 and rumors of Apple’s upcoming 12.9-inch tablets,” he says.

However, growth in the 11- and 12-inch notebook panel sizes was not enough to stave off a decline in total notebook panel shipments. Shipments to Lenovo and Hewlett-Packard fell 27% month-over-month from 6.4 million units in May to 4.7 million units in June. Therefore, these two leading notebook PC brands are taking steps to regulate panel inventory in order to guard against excess product pre-stocking, IHS says.