Three Technologies that Will Change the World

In the next five years, there are three technologies that will change the world – the Internet of Everything (IoE), cloud computing/big data and 3-D printing, according to a new white paper from IHS Technology, which owns Electronics 360.

Already in the early stages of development, IHS said the Internet of Things (IoT) is already undergoing a transformation into a broader model of the IoE that just doesn’t involve devices that connect to the Internet but how these devices use the Internet altogether. IHS forecasts that 80 billion Internet-connected devices are projected to be in use by 2024, up from less than 20 billion in 2014, as shown in Figure 1. 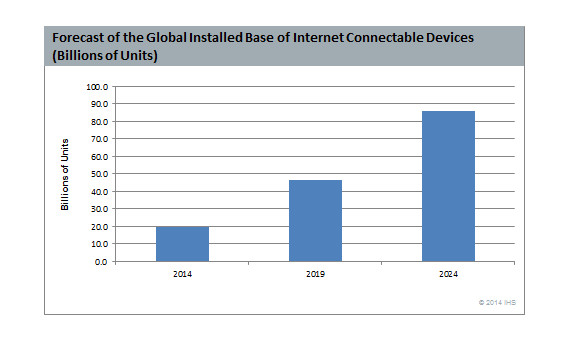 IHS forecasts the global connected device market to grow beyond the 80 billion device mark by 2024.

The majority of these 80 billion devices will be connected to a monitor and control systems, machines and objects (such as lights, thermostats, window locks and automotive electronics).

Ian Weightman, VP of reach & operations at IHS Technology, said in a statement that IHS experts were asked what technologies distinguish themselves from others and might be something that has the power to change the world in which we live.

Among the answers were IoE coming out on top, followed by cloud computing/big data at No. 2 and 3-D printing in third place.

IHS forecasts that global enterprise IT spending on cloud-based architectures will double to about $230 billion in 2017, up from about $115 billion in 2012. This type of growth is coming from nearly every consumer and enterprise across the globe getting involved in some sort of data, storage, computing power and services being uploaded to the cloud. IHS said this technology is poised to reshape almost every facet of the consumer digital lifestyle experience as well as IT strategies. Because of this, new opportunities and challenges will emerge in the market.

The benefits to 3-D printing are vast, according to IHS. The technology allows for design innovation through the creation of new structures and shapes without additional production costs as well as an increased time to market. IHS forecasts revenue for 3-D printing to rise nearly 40 percent annually through 2020 when it will reach $35.0 billion, up from $5.6 billion in 2014.

IHS Ranks the Top 10 Technologies That are Transforming the World