After 2014, which saw a new era in price competition among video surveillance vendors, the competitive landscape in this sector is changing but will still result in a projected growth of $23.6 billion by 2018, according to a new white paper from IHS Technology. 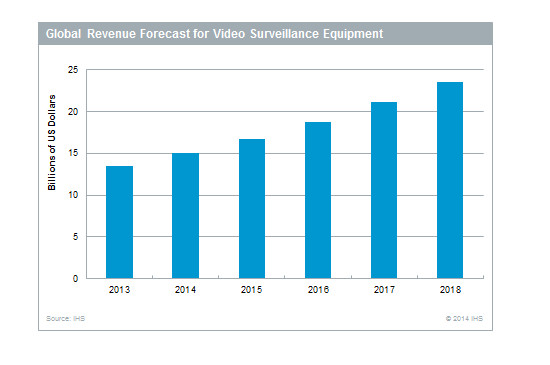 IHS forecasts the video surveillance equipment revenue forecast will grow at a CAGR of 12 percent in the next five years.

Jon Cropley, principal analyst for video surveillance and security services at IHS, said in a statement that 2014 was an interesting and disruptive year for both professional and consumer surveillance industries. As a result of chip component prices declining, surveillance vendors ushered in a new era of price competition and now “merger and acquisition activity” is impacting “the leading global product and software vendors,” Cropley said.

Despite a fragmented supply base, growth in video surveillance is able to sustain growth through brand recognition, varying geographical location requirements and the continued differentiation in products, IHS said.

In fact, IHS believes differentiation among products for every equipment vendor, distributor and integrator will be a key market driver for the next couple of years in video surveillance.

LCD Videowall Market in China Gets Big Boost from Government

On Semi Adds CMOS and CCD Sensors to its Portfolio

Industrial Electronics Turns Around in 2013 with Double-Digit Growth