Technologies Transforming the World: The Internet of Things

Editor's note: This article is the first in an Electronics360 series on 10 technologies with the potential to transform the world over the next five years identified by IHS.

As one industry segment after another goes digital, the much ballyhooed Internet of Things is transitioning from a conceptual framework to an actual business model for those who would provide the nuts and bolts of an idea that will eventually morph into an Internet of Everything.

The fundamental technologies needed to embed intelligence in devices are in hand as work expands on the scaffolding of the IoT—ongoing tasks like integrating basic hardware components like radios. Fundamental work is also underway to create the standard interfaces needed for devices to work together.

What is needed in the near term is "a single interface rather than a dozen apps," according to Bill Morelli, director of IoT connectivity and M2M communications at IHS Technology.

Taking the long view, Morelli adds, "IoT can be used to provide unique value propositions and create complex information systems which are greater than the sum of the individual components." For now, he cautions, there has been precious little integration as islands of connected devices and sensors sprout up but lack connections to the outside world.

Morelli agrees with a growing list of technology companies like Cisco Systems Inc. and Intel Corp. that the long term play for IoT is going to be around data analytics—that is, making sense of all the data collected by devices and sensors. That data will be accessible via the cloud and leveraged using big data analytical techniques.

Morelli forecasts more than 16 billion "Internet connectable" devices by 2025. The challenge for vendors will be how to move up the value chain as nearly every physical object becomes a digital gadget. 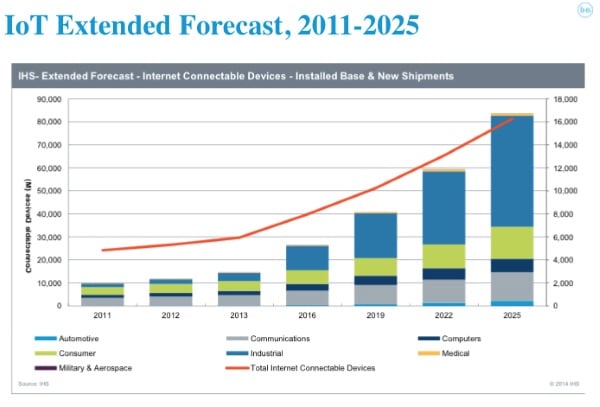 Companies like Cisco are already positioning themselves to be component suppliers for a future Internet of Everything, a construct Morelli defines as a super-platform for providing open access to data gathered and sifted by "control systems" and used in third-party applications to generate value and, some day, revenues.

Hence, the planet and most everything on it are gradually being linked as network edges bump into each other, merging like concentric circles in a pond. Ubiquitous Internet connectivity along with Moore's Law-driven cheap processing and intelligent storage are hastening the "metamorphosis [that] is not just about the number of devices; it is really about the complete departure from the way these devices have used the Internet in the past," Morelli notes.

The connection of everything also promises to deliver a deluge of data that must be stored, easily accessed and analyzed for hidden value. Hence, a mature big data industry is emerging that would be one of the obvious use cases for the systems and networks needed to make the IoT a reality.

The road crews of IoT

Intel, the world's largest chipmaker, estimates there will be 40 billion sensors and 10 billion connected devices by 2020. Intel's IoT strategy focuses on a platform for developing connected products and accompanying data services. Moreover, it projects a 40-fold jump in wireless device connections at a time when processing power has never been cheaper.

Intel, which claimed $2 billion in IoT revenues last year, and others are also moving to acquire technologies they need to flesh out their IoT strategies. Intel announced in early February it was buying connected home specialist Lantiq. The Munich-based company specializing in home gateway technologies and "IoT smart routers" provides Intel with last-mile technology needed to deliver IoT products and services.

Overall, IoT-related mergers and acquisitions last year totaled more than $14 billion, according to market watcher 451 Research. Google, Qualcomm, Samsung and others acquired more than 60 companies during 2014, including embedded computing, networking and cloud specialists. The pace of IoT deals is expected to increase this year.

Meanwhile, Cisco is raising the ante by focusing its strategy on the IoE that seeks to leverage its Application Centric Infrastructure platform to deliver what it calls "connected analytics." That effort targets Cisco's networking capabilities to push data analytics to the network edge.

In so doing, Cisco is betting it can provide the connectivity needed to pull in the data generated by connected devices, sensors and machines so that companies can sift through and make sense of the "unstructured data" generated by devices like smartphones and sensors. Examples of unstructured data include video and social media chatter. 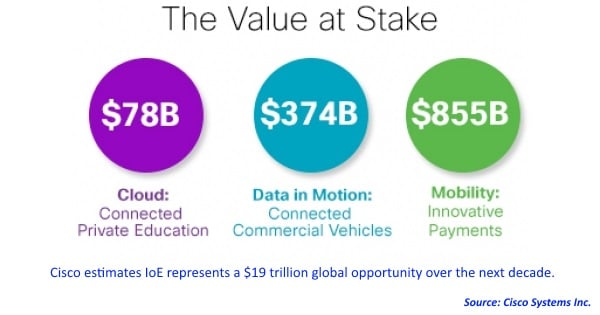 The stakes in the Internet of Things/Everything race are high: Cisco, which is essentially seeking to virtualize its networking hardware and become, in the words of CEO John Chambers, "more of a software company," reckons IoE is a $19 trillion opportunity. Morelli of IHS agrees, identifying IoT market drivers that include increasing virtualization of data centers along with IPv6 implementation and LTE and fiber network upgrades. Combined, these drivers are expanding the amount of capacity needed to handle more data.

Companies like Cisco and Intel are positioning themselves to be suppliers for data centers and cloud-computing infrastructure that will help manage the massive amounts of data to be generated by the IoE.

What's more, heavy hitters on Sand Hill Road are also placing big bets on the IoT as an actual business model. For example, leading venture investor Kleiner, Perkins Caulfield & Byers cited "the decline in the cost of data storage, the growth of the Internet of Things and the rise of consumer-generated data" as reasons for putting up $40 million in January on an intelligent data storage startup called Qumulo. The Seattle-based company's architecture is designed to make full use of flash memory technology that is expected to reach a price point as early as this year that would make it affordable for what the industry calls "primary storage."

Such VC investments are not sexy, but emerging companies like Qumulo are likely to provide the building blocks for intelligent storage of soaring volumes of structure and unstructured data that will be generated by connected devices, machines, sensors and consumers.

Despite the undeniable momentum surrounding the IoT, some observers note that the concept remains in a formative stage and the growing number of digital businesses are mostly experimenting with the concept. That may not change until IoT technologies are integrated into what observers call a "production environment."

Still, there are signs that an IoT ecosystem is emerging. For example, an Intel-led effort is promoting an open interconnect initiative for IoT technology that also has the imprimatur of the Linux Foundation. In conjunction with the open-source software group and the Open Interconnect Consortium, the Intel-backed IoTivity initiative released a reference standard in January aimed at developing interoperability standards for devices, machines and sensors that would serve as IoT building blocks and, members hope, sources of innovation.

The Open Interconnect Consortium was founded last July to help define IoT standards and create a certification process for new products and services. Along with Cisco and Intel, consortium members include Samsung Electronics, cloud specialists like Hewlett-Packard and a growing list of industrials firms like GE Software and Siemens AG.

Morelli highlights several market challenges, including global economic uncertainty and network security and privacy issues, which must still be overcome before the IoT can transition from buzz phrase to a business model. Despite recent VC activity, he adds, "A compelling business case with a solid ROI is required for equipment manufacturers, end-users or service providers who are considering investment in the Internet-connected devices market."