A collaboration between Intel Corp. and Mitsubishi Electric Corp. for factory automation systems for the Internet of Things (IoT) has already produced benefits in manufacturing to the tune of $9 million.

The Intel and Mitsubishi partnership is set to establish next-generation factory automation (FA) equipment along with a pilot program to demonstrate the benefits of IoT in a factory setting. The pilot program, using Intel’s back end manufacturing facility in Malaysia, used an Intel Atom processor-based IoT gateway called the C Controller from Mitsubishi Electric. From this gateway, Intel was able to gather and aggregate data resulting in improved equipment component uptime, increased yield and productivity by minimizing misclassification of good units as bad, enabled predictive maintenance and reduced component failures.

Intel said that the results included a $9 million savings through cost avoidance and improved decision making.

“Intel is saying that they can be a player in the industrial space and they already have proof of concept,” said Bill Morelli, associate director for M2M and IoT at IHS Technology. “At the end of the day, it is embedding more intelligence and sensors into manufacturing equipment in order to monitor your machines better and addressing failures or problems sooner rather than later. If you can replace a part in an equipment before it breaks, that is something every factory would want.”

While industrial IoT systems are a way to dramatically improve efficiency and productivity for industrial applications, there is a trade-off: It generates massive amounts of data, petabytes in some cases. Now the issue is how to store this data in real-time in order to use it to make real-time corrections in the factory. Morelli suggests this can be solved by either using the cloud or other big data offerings – opening up its own set of opportunities for companies.

Morelli added that this type of industrial IoT factory automation is not something that will grow overnight. The industrial market is very conservative, unlike the consumer replacement market, and an investment such as this one will take a long time to realize, he said.

Plus, “we are seeing a huge amount of interest in the industrial IoT space from a lot of different angles and numerous players,” Morelli said. Meaning Intel isn’t the only company looking at making FA equipment more efficient and cost productive and competitors are just around the corner.

In fact, there are a number of initiatives already happening such as Germany’s Industry 4.0 plan, General Electric’s Industrial Internet platform and numerous other smart factory programs.

IHS forecasts shipments of new connectable industrial automation devices will grow to 1.7 million by 2019, managing a compound annual growth rate (CAGR) of 9.1 percent, up from 1.0 million new devices being shipped in 2013, as shown in Figure 1. 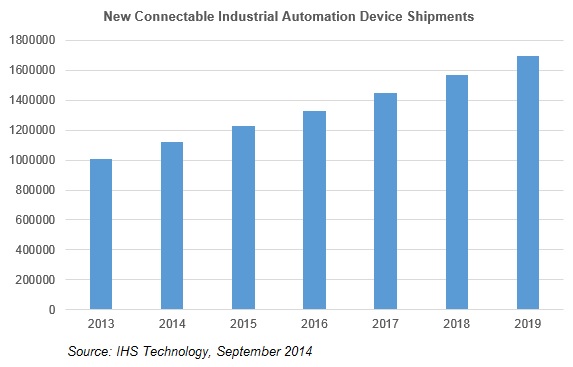 Intel said the commercialization date for the FA product is set for 2015 and both companies will be demonstrating the program at the IoT Japan 2014 tradeshow on Oct. 15-17.