North American semiconductor manufacturing equipment makers recorded $1.41 billion in orders in July, good for a book-to-bill ratio of 1.07, according to the SEMI trade group.

SEMI (San Jose, Calif.) posts order and billings figures on a three-month rolling average basis. A book-to-bill ratio of 1.07 means $107 worth of orders were received for every $100 billed for the month.

“Order activity for semiconductor equipment has held at a steady level so far for 2014,” said Denny McGuirk, president and CEO of SEMI, in a statement. “This trend, along with improvements in semiconductor device sales and unit shipments, is consistent with our outlook for strong equipment sales growth this year.”

The three-month average of worldwide bookings by North American fab gear makes is down 3 percent from the June level of $1.46 billion, SEMI said. The figure is 17 percent higher than the July 2013 order level of $1.21 billion, according to the trade group.

The three-month average of worldwide billings by North American fab tool manufacturers was $1.32 billion in July, SEMI said. The billings figure is 1 percent lower than the final June level of $1.33 billion and 9.4 percent higher than the July 2013 billings level of $1.20 billion, SEMI said. 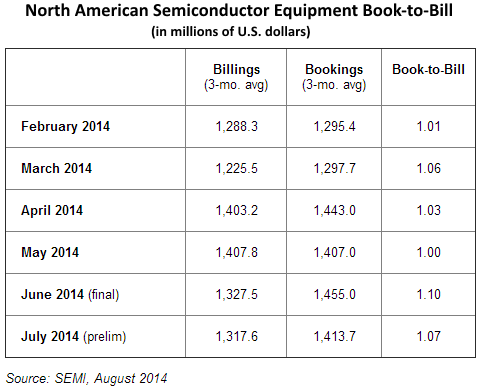 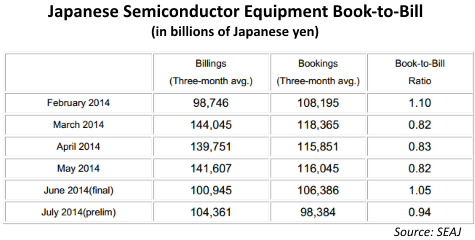