“Semiconductor equipment bookings are at the highest level since May 2012,” said Denny McGuirk, president and CEO of SEMI, in a statement. McGuirk said June’s strong bookings “substantiate the outlook for strong double-digit sales growth this year.” 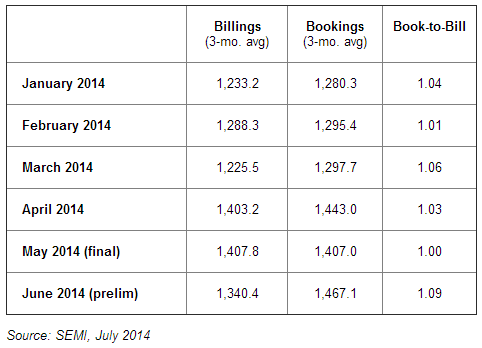 Driving double-digit growth in equipment spending are investments by chipmakers in sub-20nm technology, expansion of advanced packing technology capacity and DRAM technology upgrades for mobile applications, among others.

The equipment book-to-bill ratio was 1.09 in June, up from 1.00 in May. A ratio of 1.09 means equipment manufacturers received $109 in new orders for every $100 of orders that they shipped in June. At 1.09, the ratio is highest that it has been all year. The previous highest ratio for the year was 1.06 in March.

The SEMI book-to-bill is a ratio of three-month moving averages of worldwide bookings and billings for North American-based semiconductor equipment manufacturers.