Advanced Micro Devices (AMD) has made its first foray into the solid state drive (SSD) business circling the wagons in an effort to carve out market share among gaming enthusiasts.

The Radeon R7 series SSDs – offered in 120GB, 240GB or 480GB capacities – was developed in collaboration with OCZ Storage Solutions, a branch of Toshiba. The SSDs feature Toshiba’s A19 MLC NAND flash as well as its Barefoot 3 M00 controller offering read/write speeds of up to 550MB/sec and 530MB/sec, respectively.

AMD is trying to capture a piece of the forecasted $1.6 billion in revenue the desktop PC SDD market is expected to reach by 2018, up from $561 million the market is forecast to garner this year, as shown in Figure 1. The desktop PC SSD market also is the fastest growing solid state segment with a 27 percent compound annual growth rate (CAGR) compared to enterprise (15 percent), notebook (17 percent) and Ultrathin and industrial (18 percent). 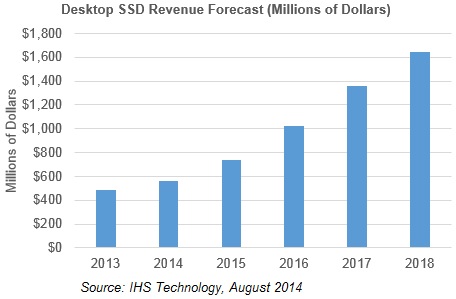 “[AMD’s] competitor, Intel, has been developing SSD for the enterprise business for a while, so AMD is late to enter the market and very late to enter the SSD enterprise business,” said Fang Zhang, senior storage analyst at IHS Technology. “However, targeting the gaming market is definitely a way for AMD to enter the market. The gaming market is kind of new to SSD and growing rapidly, competitors should definitely pay attention to what they are doing.”

While gaming may be a way in to the solid state market, Zhang said that in reality many SSDs can, and are, being used already by gamers to increase their speed. “While there might be some software compatibility related to or involved in gaming, the hardware should be common,” she said.

AMD joins a market that has been very crowded with companies all competing for market share. While some of these companies focus on one particular market, such as enterprise or consumer or PCs, the larger companies – Samsung, SanDisk, HGST, WDC – focus on serving the entire market. So, “[AMD] may find this market as an entry place,” Zhang said.

The AMD Radeon R7 Series SSDs are available now with a price point of $99.99 for the 120GB drive.