Most car manufacturers are developing "autonomous" cars, i.e. vehicles that still need a driver to take over the steering wheel or acceleration/braking pedal functions in case of unanticipated events.

But Google has made a leap with a pure "driverless car"–a car without human intervention, steering wheel & acceleration/braking pedals. This leap will boost revenue growth for semiconductors over the next five to six years.

Safety compliant MCUs and processor units to reach half a billion dollars by 2020;Revenues from optical sensors to grow seven-fold by 2020

As functional safety becomes increasingly important revenues for ASIL (Automotive Safety Integrity Level) compliant MCUs and processor units are predicted to reach almost half a billion dollars by 2020, from just $69 million last year. Among the sensors used for autonomous driver assistance applications, revenue for optical sensors is expected to grow seven-fold in the period spanning 2013 to 2020. 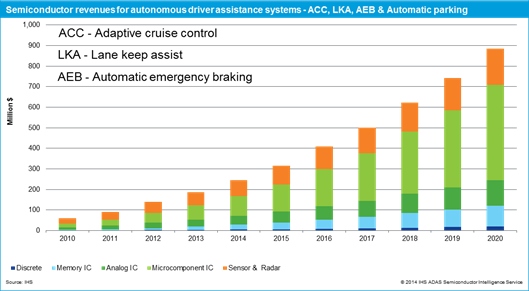 ECUs are solely responsible for the safety of the passengers inside the driverless car, as well as for safety of pedestrians and other vehicles.

Micro-controller units (MCU) and other semiconductor ICs used in these ECUs need to be compliant with stringent safety certifications such as ISO 26262 or ASIL. ASIL compliant chips cost more than the standard ICs.

The absence of human intervention in driverless cars demands higher functionality—via algorithms—from an ECU. With this higher number of algorithms, the following trends will be evident:

These factors impact the growth of semiconductor IC revenue for autonomous driver assistance applications. Strong growth is predicted with a compound annual growth rate (CAGR) of 25 percent from 2013 to 2020.

Semiconductor technology is already available for implementing driverless cars. Everything is possible on the roadmap of autonomous cars with the current technology. But one of the key challenges is human acceptance. Travelling in a car without a steering wheel and accelerating/braking pedals is bound to be perceived as alien to current drivers. More than this, there would be key legal and liability issues to pass through. 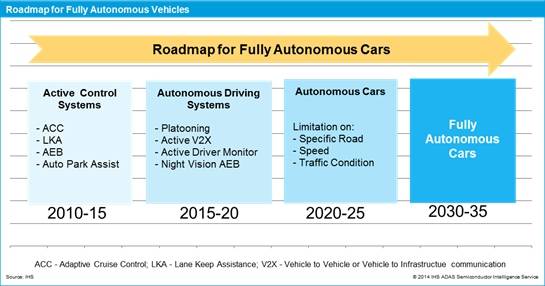 Driverless, but not entirely autonomous

Autonomous driver assistance systems have active-control mechanisms which take over the control of a car from the driver only to brake or steer in avoiding an accident when the driver does not respond to the warnings. Adaptive cruise control (ACC) and Automatic emergency braking (AEB) are few examples.

An autonomous car is a vehicle which not just spontaneously brakes or steers but drives a car automatically in different driving scenarios without human intervention. As shown in the picture below, Google's driverless car is still not "fully autonomous" because of limited operational conditions, especially with a speed limit of 25 miles per hour.