The auto industry is making steady progress toward the ultimate goal of autonomous cars, where drivers are redundant. These vehicles may start to appear on the road in less than a dozen years, according to a recent Electronics360 webinar,

Today, vehicles communicate across networks to alert their drivers to traffic congestion; have embedded sensors that allow them to park themselves; and most important, can save lives through the use of sophisticated collision avoidance systems. But automotive OEMs, their suppliers, consumers and government agencies are looking to electronics to take automated driving much further in the next decade, according to Jeremy Carlson, senior analyst for Advanced Driver Assist Systems with IHS Automotive, in a recent Electronics360 webinar entitled Toward the Autonomous Auto: Technology and Regulatory Development on the Road to Automated Driving Registration.

The U.S. and European Union lose an average of 30,000 people a year to vehicle-related accidents. The electronics safety systems already deployed in cars – airbags, antilock brakes, rearview cameras and collision warnings – have had the desired effect. Total vehicle fatalities in the U.S. have decreased by more than 22 percent through 2011, according to Carlson. In addition to saving lives, these driver-assistance systems help reduce expenses – estimated at more than $300 billion in the U.S. alone – associated with accident-related damage and liability.

Unfortunately, Carlson explained, costs are not declining as rapidly as fatalities. More sophisticated electronics systems can pave the way for further improvement in both categories.

The next level of advanced driver assist systems (ADAS) target increased awareness, decreased risk and the automation of certain tasks. Applications such as adaptive cruise control, lane departure warning, side object detection and driver monitoring are already available in certain makes and models. According to the Highway Loss Data Institute, ADAS systems can reduce property damage liability claim frequency by as much as 10 percent to 14 percent.

Of course, certain levels of safety features are mandated by government regulatory agencies in most major markets including the EU, U.S. and Japan. Although these regulations are targeted primarily at driver and pedestrian safety, they can also encourage innovation competition; widen availability of advanced technologies; and increase consumer awareness and adoption, Carlson said.

Wireless vehicle-to-vehicle-to-infrastructure communications (V2V2I) is another component of increased safety measures. V2V2I offers standalone safety application or can act as a complement to ADAS. For example, ADAS vehicle sensors provide awareness up to 250 meters; while V2V2I extends that range to several miles, Carlson said.

For all the purported benefits, however, autonomous driving isn’t moving forward at warp speed. There are both technical and regulatory challenges to overcome. For example, the 5 GHz communications band that V2V2I applications operate on isn’t a universal standard and may fall under scrutiny by regulars in the U.S. And software development required to gather and interpret the data to make a driving experience “feel” human is not a core competency of the automotive supply chain.

“Software is an important component of the market, and OEMs and tier-1 suppliers are increasingly realizing they don’t have to develop their own software and can outsource it to companies with more expertise,” Carlson said. The look and feel of a driving experience is going to be crucial to user adoption of the autonomous vehicle, he added.

Still, the electronics industry has already hit various milestones on the journey toward autonomous driving. Of 59 individuals responding to an IHS poll, 44 percent expect driverless cars will be mass produced no later than 2025 (see the chart below). IHS puts the date for full self-driving automation in the same ballpark.

Carlson reported that the necessary hardware is already in place, while software is a work in progress. Costs will start out high, but educated drivers appear to be willing to pay a premium for the extra safety, efficiency and convenience of autonomous vehicles. The biggest hurdle is likely to be the issues of liability and risk. 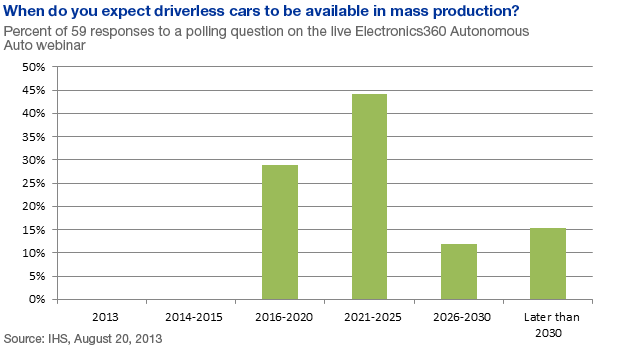