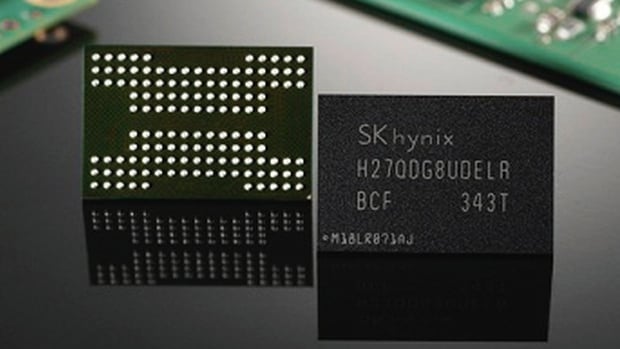 SK Hynix Inc. said it has commenced mass production of a 64-Gbit multi-level cell NAND flash memory implemented in a 16-nm manufacturing process and designed another chip at twice the memory capacity. The 128-Gbit NAND flash memory is due to go into production at the beginning of 2014, the company said.

This would put SK Hynix close behind Micron Technology Inc., which announced in July that it is sampling a 16-nm, 128-Gb MLC NAND. Micron plans to have this chip in full production by the fourth quarter.

SK Hynix has a research paper on a 64-Gb NAND memory scheduled for presentation at the 2014 International Solid-State Circuits Conference (ISSCC) in San Francisco in February that supports 400 Mb per second through a NV-DDR2 interface for high-speed data transaction.

However, SK Hynix said Wednesday (Nov. 20) it has been producing a first version of the 64-Gbit chip since June and has now started to mass produce a second version with a reduced die area while also designing a 128-Gb chip.

SK Hynix 16-nm NAND flash chips include air-gap insularing technology between the memory cells to minimize cross-talk. The company said it plans to strengthen its competitiveness in NAND flash memory by accelerating the development of triple level cell (TLC) and 3-D NAND flash.

SK Hynix faces competition from Samsung in this area. In August, Samsung announced it had begun mass production of a 128-Gb vertical NAND flash memory integrated in 24 layers and claimed it was the first company to start making a 3-D NAND component. Meanwhile, BeSang Inc. (Beaverton, Ore.) announced that it had licensed 3-D circuit stacking technology to SK Hynix.