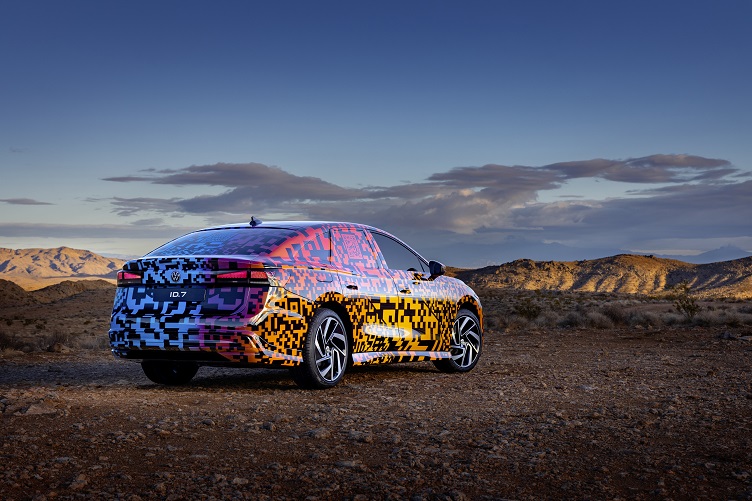 The camo concept of the ID.7 will be shown at CES 2023, but it probably won’t be something you can have on your own car once its in production. Source: Volkswagen

Volkswagen (VW) has unveiled its sixth model from the ID family and the second global electric vehicle (EV) based on the company’s modular electric drive matrix (MEB) technology.

The announcement of the ID.7 EV was made at this week’s CES 2023 in Las Vegas, as expected, and at the show a smart camouflage iteration of the vehicle will be showcased.

Additionally, VW said it has reached a milestone with the delivery of 500,000 ID.3 models worldwide through its subsidiaries. This is about one year earlier than expected and comes while the automotive market is continuing to find difficulty in finding enough semiconductors.

All told, VW has introduced the ID.3, ID.4, ID.5 and China-only ID.6 models. The ID.7 electric sedan will be for Europe, China and North America. In Europe, the EV will be produced at the VW Emden, Germany, plant and it will be the second model based on the MEB architecture to be built in Emden.

The new EV includes a variety of innovations that were not included in other EV models from VW, specifically:

The vehicle can detect when a driver is approaching based on the key and will start to cool the interior on hot days and heat the interior on cold days. It also has integrated smart air vents to control the flow of air to distribute it over large areas in the vehicle.

The camouflaged sedan is being shown at CES and will light up the ID.7 interactively, VW said. Forty layers of paint have been applied to the vehicle, some of which is conductive and others that have insulating properties. Further, 22 areas of the vehicle can then be controlled separately and are electrified below the top layer of paint, so it lights up.

Once connected to a sound system, it can mimic the visualization of the sound and create a scene. There are QR codes on the hood and on both sides of the ID.7 concept to provide an interface between digital worlds and the physical side.