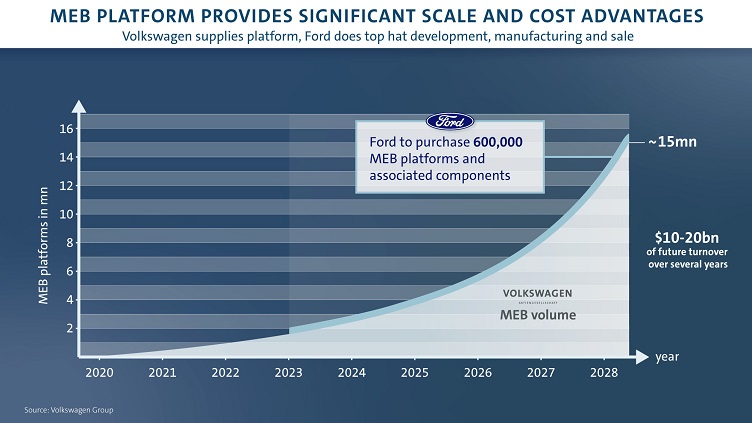 Predicted volume of electric vehicles that Ford will manufacture in the coming years based on Volkswagen's MEB architecture. Source: Volkswagen

Both companies have been actively ramping up their EV portfolios because of government regulations limiting emissions. Consumer interest has also grown considerably in the last few years thanks to the proliferation of Tesla Motors’ EVs and a desire to decrease their own carbon footprint.

Two years ago, Ford made the switch to focus heavily on EVs, reducing its number of employees focused on gasoline powered vehicles while simultaneously investing $11 billion in electrification. Additionally, Ford invested $500 million in Tesla rival Rivian to develop a next-generation battery for EVs.

Volkswagen has also ramped up its electrification plans and its investments from $9.1 billion to $21.5 billion through 2023 and late last year rolled out its first EV, the ID.3 vehicle, with 100,000 electric models rolled out in 2020 before the COVID-19 pandemic and 330,000 vehicles expected to be rolled out by 2021.

However, these plans have changed substantially because of COVID-19, with many production factories closing for a month due to social distancing and a lack of materials in the supply chain. The overall automotive market is rapidly switching to EVs because of demand and regulations and a temporary slowdown will not impact this, most analysts forecast.

The new alliance between the companies will produce a pickup truck engineered and built by Ford but sold by Volkswagen starting in 2022. The companies will also develop a Ford EV for the European market for release in 2023 built on Volkswagen’s modular electric drive (MEB) toolkit. Commercial vehicles will also be developed by both companies for introduction as early as 2021.

“In light of the Covid-19 pandemic and its impacts on the global economy, more than ever it is vital to set up resilient alliances between strong companies,” said Dr. Herbert Diess, CEO of Volkswagen Group. “This collaboration will efficiently drive down development costs, allowing broader global distribution of electric and commercial vehicles, and enhance the positions of both companies.”

Ford said that by 2023, it could deliver 600,000 EVs using the MEB toolkit and will be the cornerstone in Volkswagen’s EV strategy in Europe and will help the company honor commitments to the 2015 Paris Agreement on climate change.

One other part of the agreement will see both Volkswagen and Ford working with Argo AI for autonomous vehicle businesses based on Argo AI’s self-driving technology. Volkswagen just last week invested in Argo AI, a self-driving car company that Ford has already invested $1 billion in since 2017.