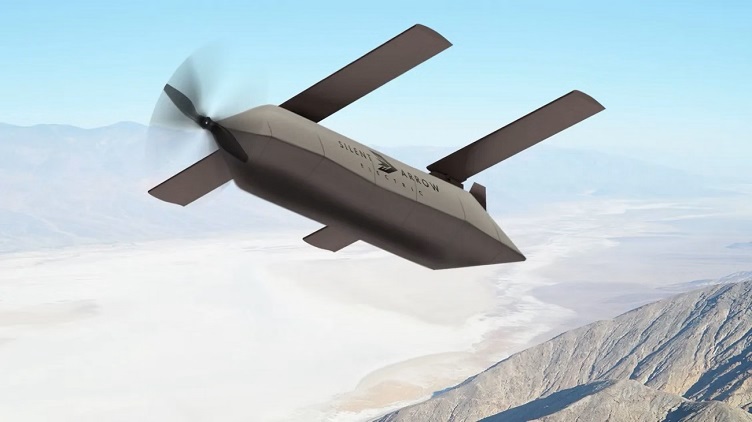 The Silent Arrow aircraft can be deployed by helicopter or other flying machine for resupply. Source: Yates Electrospace Corp.

Yates Electrospace Corp. (YEC) has unveiled its huge, autonomous cargo aircraft, a delivery drone capable of carrying up to 1,631 pounds of supplies.

Called Silent Arrow GD-2000, the delivery drone features an improved glide ratio and accurate landing and stealth capabilities. The cargo aircraft is designed to address tactical resupply issues for the defense market as well as for humanitarian and disaster relief.

Silent Arrow features an integrated packaging system with spring-deployed wings inside the fuselage and is deployed via fixed-wing or rotorcraft to deliver supplies, cargo and fuel under critical operating conditions and timelines.

YEC said it has distribution agreements with 34 territories including the EU, the U.K., Australia, Singapore, South Korea, Israel, Brazil and India.

Development of delivery drones is progressing from a number of different startups and larger, more established companies alike pushing for what they believe will be the next-generation of last-mile logistics.

Parcel delivery giant UPS is seeking FAA approval for its own service. And other big-name vendors have had their own initiatives, including FedEx, Google’s Wing, Airbus and Amazon. Meanwhile, new methods of delivery may bring additional sources of revenue for companies in this emerging market.

Numerous startups are also in the mix such as Flytrex, Drone Delivery Canada, Matternet, Zipline, Workhorse Group and many more.

YEC is displaying the cargo delivery drone at the DSEI show in London taking place this week.