Getting to the Bottom of Fake News 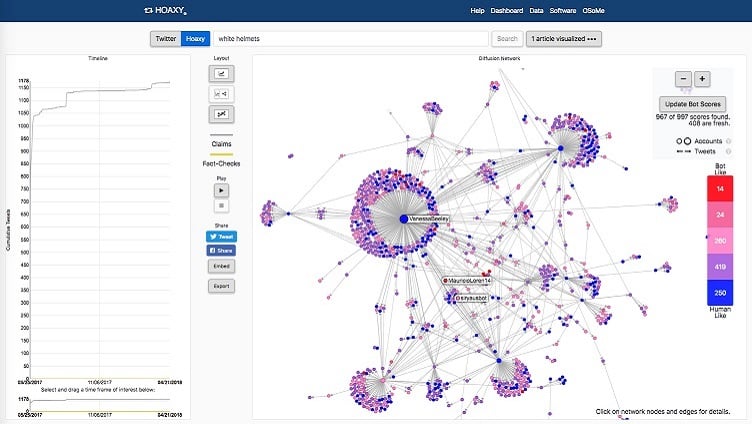 A search on Hoaxy traces the spread of a news story involving chemical weapons attacks in Syria. The red and dark pink dots indicate Twitter accounts likely to be "bots" used to amplify the message. Source: Hoaxy.

Two tools playing a role in countering the spread of “fake news” are Hoaxy and Botometer. Both have just received upgrades from researchers at the Indiana University Observatory on Social Media, designed to make the tools more usable by journalists and average citizens.

"You can now easily detect when information is spreading virally, and who is responsible for its spread," explained Filippo Menczer, an IU professor and member of the IU Network Science Institute.

Hoaxy is a search engine that shows users how stories from low-credibility sources spread on Twitter; Botometer is an app that assigns a score to Twitter users based on the likelihood that the account is automated.

The new functionality for Hoaxy allows users to see which stories are trending, and what proportion of users spreading those stories are likely to be “bots.” Previously, users could only analyze headlines from specific websites identified as likely to post false or misleading information; the tool can now trace the spread of any online news story or hashtag over time across Twitter.

Botometer’s new version employs updated machine-learning algorithms to identify "bots" with greater accuracy, and is strongly integrated with Hoaxy. As a result, users can now observe not only how information spreads across Twitter, but also whether these messages are mostly shared by real people or pushed by a computer program potentially designed to sway public opinion.

According to research scientist Giovanni Luca Ciampaglia, also of the IU Network Science Institute, Hoaxy and Botometer currently process hundreds of thousands of daily online queries. The technology has enabled researchers to study how information flows online in the presence of bots. In April, an analysis from the Pew Research Center that relied on Botometer concluded that nearly two-thirds of the links to popular websites on Twitter are shared by automated accounts.

All three tools are united in their goal of helping individuals understand the role of misinformation online, Menczer said.