Americans are Very Open to Robots Delivering Their Mail 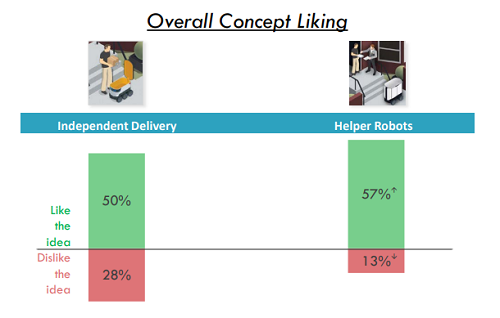 Consumers are open to the idea of having mail delivered by robot or robot helpers. Source: USPS What once was considered a crazy idea by Amazon to deliver packages via robot (in this case a delivery drone) has transitioned into an explosion of new projects and concepts for the delivery of goods to consumers.

While there is a host of new projects involving drones used for delivery of anything from parcels, to drinks, to food, to groceries, to medicine, a number of delivery robots stay on the ground, including Robby 2, Segway’s Loomo, Udelv’s grocery delivery vans, even automated pizza delivery and multiple projects involving robots taking place across the U.S.

But with all these potential projects currently under development or in the pilot phase, no one has asked if consumers actually want robots delivering goods to them.

That is not until the U.S. Postal Service conducted a survey examining the public’s perception of robots delivering mail to their residences and workplaces instead of a human. Residents aged 18 to 75 years of age from all 50 states were surveyed in order to gauge their opinions about two types of delivery services involving robots. The first type is independent delivery where robots would transport mail and packages from senders to receivers on their own without any human accompaniment. In the second type, helper robots follow delivery people as they work, freeing them up from having to carry many items at once or retrieving items from a delivery truck.

The Post Office survey found that numerous respondents were aware of delivery drones but not of delivery robots. But after learning about these robots, a large majority believe that they would see them in active use within the next five years. Moreover, many respondents were positive about the idea of having their mail or packages delivered by a robot; the helper robot category was even better received.

In fact, three in four survey respondents were open to receiving delivery from a robot and many would be willing to pay more to receive the touted benefits of robot delivery — faster delivery, increased privatization, environmental benefits and more flexible delivery hours.

Interestingly, the Post Office found that those that were unaware of robotic delivery were more comfortable with the idea than those who had already heard about it. This is especially true when it comes to helper robots that are seen more as a bridge between current delivery options and full robotic delivery. Unsurprisingly, millennials and urban residents were more open to adoption of robotic delivery than their older or more rural counterparts.

The most concerning aspects of using robots for delivery were theft, taking jobs away from humans and robotic malfunction, although a majority of those surveyed believe robots are intrinsically safe.