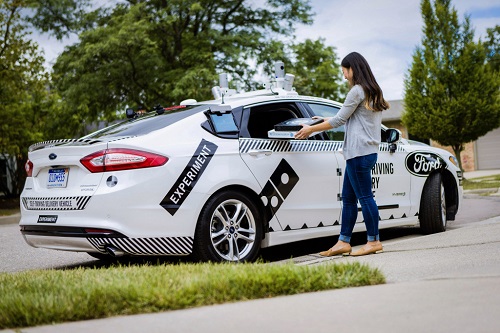 A customer receives a pizza from an autonomous delivery vehicle. Source: Ford A new experiment in the role of autonomous driving is being conducted by Domino’s Pizza and Ford Motor Co. as the two are investigating customer reactions to interacting with self-driving cars as part of pizza delivery.

The companies say the vehicle tests will allow for a better understanding of customers’ perspectives regarding the future of food delivery using autonomous vehicles.

As part of the experiment, Domino’s will use Ford’s self-driving vehicles, the Ford Fusion Hybrid research cars, which will be manually driven by a Ford safety engineer and staffed with researchers. Over the next few weeks, randomly selected customers in Ann Arbor, Michigan will have the opportunity to receive their delivery order from one of the Ford cars.

Those who participate in the experiment will be able to track the delivery vehicle through GPS using an upgraded version of the Domino’s Tracker. As the vehicle approaches, consumers will receive text messages that show how to unlock the Domino’s Heatwave Compartment inside the vehicle.

"As we increase our understanding of the business opportunity for self-driving vehicles to support the movement of people and goods, we're pleased to have Domino's join us in this important part of the development process," says Sherif Marakby, VP of autonomous and electric vehicles at Ford. "As a company focused on the customer experience, Domino's shares our vision for a future enabled by smart vehicles in a smart environment that enhance people's lives."

Ford plans to begin production of self-driving vehicles for consumer use beginning in 2021 and is ramping up its projects to support both consumer and partner business needs.