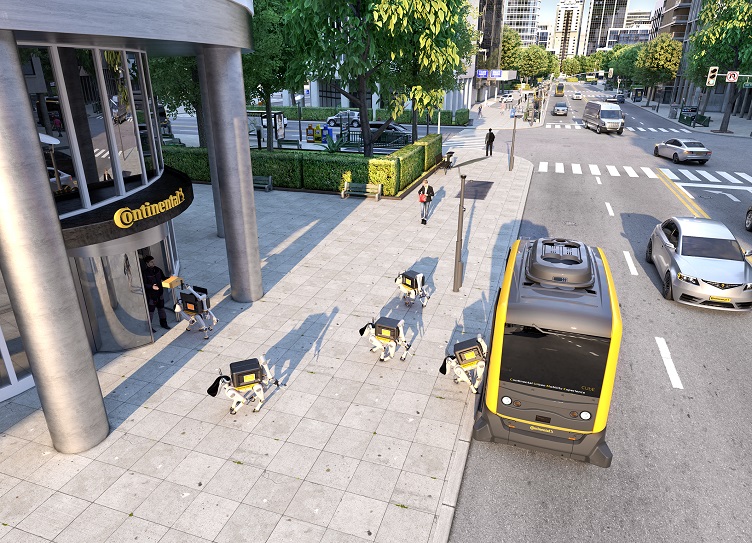 Delivery robots are deployed from an autonomous vehicle pod for last mile delivery in this prototype. Source: Continental

Advancements in robotics, automation and aerospace are spilling over to the last-mile logistics and delivery market in a big way.

In the past year and a half, drone delivery has been on the rise with numerous startups, major package delivery vendors, online retailers and drone makers conducting pilot projects to test the viability and operation of these unmanned aerial vehicles (UAVs) in the real-world as an alternative to using traditional package delivery methods.

Simultaneously, the rise of delivery robots as a means to deliver both packages and operate as a portable, autonomous vending machine has accelerated to the point where food and drink giants are getting in on the act, testing their own robots in the field. While some experiments have had setbacks, a 2018 study found that most Americans were open to the idea of having their mail or packages delivered by a robot leading to numerous startups and established vendors running pilot projects to test the viability of the delivery method.

Then there are the autonomous vehicle pilot projects for food and goods delivery as seen by the recent push by Kroger and Ford into the market.

All of these delivery methods have one goal in mind: Create a more convenient and cost-effective system for last-mile logistics that utilizes technology instead of people. Numerous reports have emerged that conclude the current number of delivery trucks and drivers isn’t sufficient enough to meet coming demand from consumers who are buying more goods online with no sign of slowing.

At CES 2019, taking place this week in Las Vegas, Continental took the idea of last-mile delivery robots to a whole new level with a concept that combines driverless vehicles with an army of deployable robot dogs to deliver packages and goods.

The prototype vehicle and robot dogs are part of Continental’s Urban Mobility Experience (CUbE) platform. The vehicle is a pod-type vehicle that is fully electric and fully autonomous with the purpose of reducing idle times of use in delivery and upping the transport capacity.

“With the help of robot delivery, Continental’s vision for seamless mobility can extend right to your doorstep. Our vision of cascaded robot delivery leverages a driverless vehicle to carry delivery robots, creating an efficient transport team,” said Ralph Lauxmann, Head of Systems & Technology, Chassis & Safety division at Continental. “Both are electrified, both are autonomous and, in principle, both can be based on the same scalable technology portfolio.”

The CUbE can carry one or multiple delivery robots and deploy them to handle the last yards of the goods and parcel delivery logistics chain. Continental said delivery robots will require technology that is just as advanced as the driverless vehicles that carry them, so it is working to transfer and scale automotive technology it has developed to meet robot manufacturers' needs.

Also, given that human deliveries typically take place during the day when many people are working, at school or otherwise busy, the autonomous pods and robots could be timed to meet the needs of the consumer and deliver packages after-hours or during off-peak times.

At CES, Continental is demonstrating its prototypes in the North Hall at booth No. 7519.

Click here to check out Electronics360’s full coverage of CES 2019.