Additive manufacturing — also referred to as 3D printing — has advanced past initial applications involving production of plastic prototypes for engineers and designers. Medical implants and prosthetics are now being 3D printed, and fabrication of 3D models of organs helps surgeons prepare for complex procedures. The technology is being tapped by the military: The U.S. Army and Marines have developed an on-demand printing system with a suite of tools that allows soldiers to enter mission parameters and then get a 3D-printed aviation asset within 24 hours.

A selective laser sintering 3D process is being used to manufacture aircraft cabin components. How about historical reconstruction? The bones of the first king of Denmark have been replicated from 3D scans. Construct a house in a matter of hours? There’s a 3D printing system (actually, a robot) for that, too.

The adoption of 3D printing by virtually every sector — including the DIY and maker-space arenas — has spurred advances in the technology enabling faster fabrication, use of different materials and reduced product post-processing. 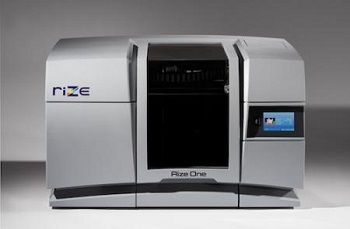 The Rize™ One hybrid printer. Source: RizeA notable benefit of this method is that unlike most 3D- printing techniques, APD requires very little post-processing. Once a part comes off the print bed, support structures are easily removed by hand. The method revolves around the use of the Rize™ One hybrid printer, a proprietary thermoplastic filament, Rizium™ One, and Release One functional ink, which is jetted where needed between the part and its support structure to weaken the bond between these two layers. The company promises a fume-free, fast turnaround time for proof of concept prototypes, functional prototypes, end-use production parts, customized tooling, and fixtures and jigs for manufacturing.

Are you planning to sport a pair of Futurecraft 4D running shoes, a soon-to-hit-the-market offering from Adidas? The shoes are being manufactured by Redwood City, California-based Carbon, a company bent on making 3D printing a viable manufacturing method for large-scale production across industries.

The company developed its continuous liquid interface production (CLIP) method as a photochemical process that exploits light and oxygen to rapidly produce objects from a pool of resin. CLIP is applied in concert with a digital light synthesis (DLS) scheme that uses digital light projection, oxygen permeable optics and programmable liquid resins to produce parts with excellent mechanical properties, resolution and surface finish.

Objects can be printed up to 10 times faster than with other 3D systems. Instead of printing an object layer 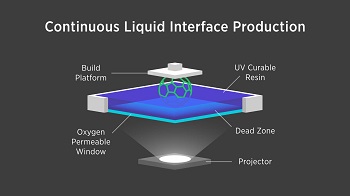 Schematic of CLIP. Source: Carbonby layer from the top down like traditional additive 3D printers, Carbon’s process is continuous and starts from the bottom. The use of liquid resin material also allows for a much more flexible final product compared to the material used by traditional 3D printers.

The method projects light through an oxygen-permeable window into a reservoir of UV-curable resin, and as a sequence of UV images is projected, the part solidifies and the build platform rises.

The core of CLIP is the “dead zone” — a thin, liquid interface of uncured resin between the window and the printing part. Light passes through this region, curing the resin above it to form a solid part. Resin flows beneath the curing part as the print progresses, maintaining the continuous liquid interface that powers CLIP. After printing, a part is baked in a forced-circulation oven. Heat sets off a secondary chemical reaction that causes the materials to adapt and strengthen.

CLIP’s footprint has been expanded into medical, dental and consumer electronics — most recently development of protective solutions for mobile devices.

These and other emerging 3D-printing options promise to lend themselves to a wider range of materials and applications, and speed up production whether on terra firma or elsewhere.