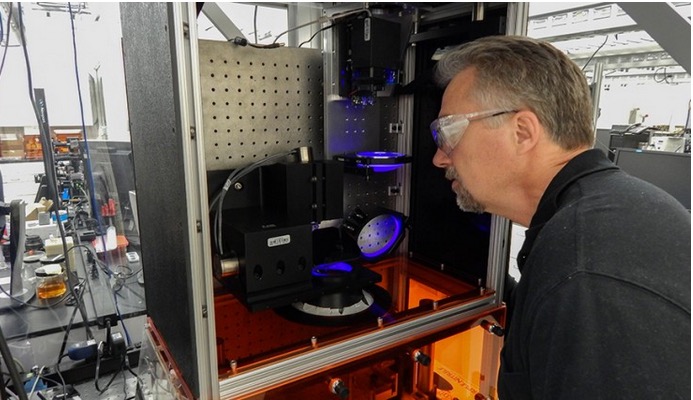 Lawrence Livermore National Laboratory engineer Bryan Moran has created a printer that projects an image onto a liquid resin that hardens when hit by light in order to create 3D objects. (Photo by Julie Russell/LLNL)

LLNL engineer Bryan Moran stumbled on the method that uses UV light to create larger and more detailed 3D objects than was possible to date. Based on his findings, Moran has received the 2015 Federal Laboratory Consortium Far West Region Award and filed a patent for his LAPµSL 3D printer technology.

Previously, 3D printing technology designed for micro-fabrication was to focus a beam onto a UV-curable polymer resin surface using a predetermined pattern. The resin layers were then hardened until the 3D object formed, creating thicknesses of up to 400mm. In order to go beyond 400mm, Moran combined Direct Light Processing, higher speeds and a larger scan area. The result was to achieve high-resolution detail with the printer, while rapidly printing larger and more complex objects with sizes of 10 centimeters, but features in the micrometer range.

Amazingly, Moran is fairly new to the additive manufacturing scene, coming from a laser/optics specialization, he’s only been dabbling in the technology for the past three years. His work at LLNL continues, where he’s upgrading the technology to increase area and speed by 10x with features that are 5x smaller. His upgrade also features custom optics and larger scan mirrors.

Flexible Plastic—It’s all in the Materials

Similar to the importance of location for a business, material composition can make the difference between amazing success or dismal failure—especially in the realm of 3D printing.

Trying to build greater flexibility into 3D printing, Sculpteo unveiled a new material that does just that without taking a hit to durability. Called Flexible Plastic, the thermoplastic polyurethane (TPU) has a Shore hardness of 65A, less than found in 3D printing materials. Used so far in printing a 3D model of a human heart as well as clothing from the flexible material, the technology has an interlocking pattern from selective laser sintering. 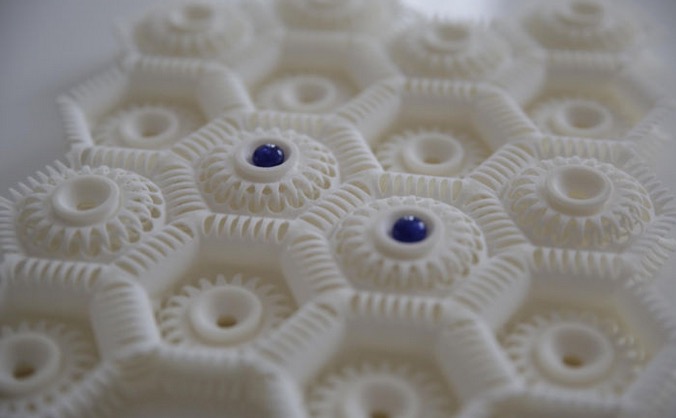 Flexible Plastic, while not as expensive as rigid materials, is limited to prints of 6 x 6 x 6 inches and the printing itself takes longer. Benefits are that the material can be used effectively in 3D automotive parts, wearables and consumer electronics when bending or twisting without breaking is required.

A research team at the University of Bristol recently announced 3D printing capabilities for printing composite materials such as those required in high performance products, from sports equipment to airplanes. Published in Smart Materials and Structures, the research demonstrates the use ultrasonic waves to position millions of small reinforcement fibers within the printing process. The fibers provide strength to the microstructure, which is set in place via a focused laser beam used to cure the epoxy resin before printing the object. Switching the ultrasonic wave pattern during printing controls the fiber orientation. Print speeds of 20mm/s were documented.

The focused laser beam was mounted by the team onto the carriage of a standard three-axis 3D printing stage, above the new ultrasonic alignment apparatus, demonstrating that it is an inexpensive addition to a standard 3D printer—to create a composite printer.

Using Nanoscribe’s Photonic Professional GT printer with the ability to turn out detailed objects the size of a human hair, researchers created microbots designed to deliver drugs to specific areas of the body and nano-tools for use in microsurgery. The team used a two-photon polymerization method with a controlled pulse laser to fuse molecules or solidify a light-sensitive material to build the layers. To date, 3D structures resulting from the research are down to 150 nanometers.

From printed human organs printed from inks made of living cells, biobots, bio-robots capable of repairing organs or depositing drugs directly, and nano-robots housing DNA strands have been printed that open up selectively whenever they meet cancer cells and delivering antibodies that destroy them—medical apps are transforming the future of medicine.

Life in the 3D Fast Lane

3D printing advances are the fodder of headlines almost weekly. From printers to materials to new and zoomier applications, the technology is literally exploding. Estimates by companies such as Siemens that 3D printers will be 400x faster and 50% less expensive in the next five years are fueling planning, while amazing use cases such as astronauts printing 3D printed tools and replacement parts show that the technology is truly real.

For $1,000 individuals can own their own personal 3D printer, and necessary devices such as prosthetics can be had for a fraction of last year’s cost. MakerBot offered free print plans on their Web site and digitized robot hand drawings were downloaded a whopping 55,000 times in one year.

For all of the progress, there’s room for much more. To date, 3D printing often yields substandard-layered parts with inherent weaknesses compared to traditional molded ones. Safety standards and materials and their pollution potential in the workplace are in question. And, at some point, legal risks are destined to find their way into courts. Issues of comparable quality will rise with printed parts and devices and some providers will just be better at it than others.

Most of the information contained here is still in the lab, but it won’t be for long. 3D printing, whether for industrial, medical or consumer use is here to stay. It’s difficult to imagine the landscape in another few years when it truly becomes ubiquitous.