AI: The New Tool for HIV Prevention Among Teens

Researchers from USC Center for AI for Society (CAIS) have created two algorithms that are over 150 percent more effective in spreading public health information than the method currently used by social service agencies. CAIS is a joint research project between USC Viterbi School of Engineering and the USC Suzanne Dworak-Peck School of Social Work. These algorithms identify influential peer leaders in order to share HIV prevention information in real-world peer networks and to facilitate peer-to-peer interventions with homeless youth. 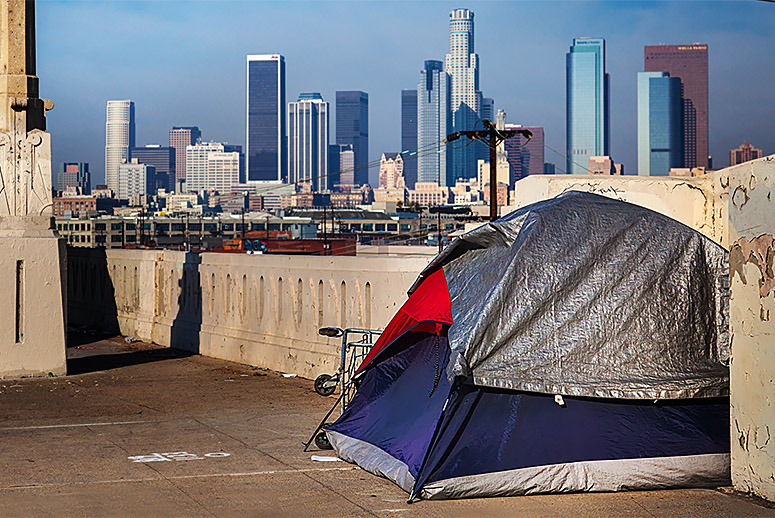 A tent where one of the 44,000 homeless people in Los Angeles County sleeps is within view of the city's financial center. (Source: Getty Images)

Influence maximization is the science of how people spread information to each other. This project was adopted by computer scientists and social work researchers affiliated with USC CAIS in order to strengthen the reach of social service agencies with a limited budget and help distribution of important public health announcements.

This study was built on previous work by the same team of researchers in order to maximize the impact of peer leaders from a Los Angeles homeless youth program. In this study, the researchers created algorithms and tested the success of the algorithms performed in predicting which peer leaders would be the most effective at spreading public health information. They had two predictive tools: HEALER (Hierarchical Ensembling-based Agent which pLans for Effective Reduction in HIV spread) and DOSIM (Double Oracle for Social Influence Maximization). These tools were field tested over a seven-month period.

HEALER and DOSIM were both successful in changing the behavior of the teens who received public health messages about HIV preventions.

HEALER assumed that the teens participating in the study would rate all their friends in terms of closeness and then rate the teen’s willingness to confide in them about sexuality and/or HIV status. This information was incorporated into HEALER. But in many real-world settings, this information is hard to obtain. DOSIM removes the assumption and works even if the youth in the study don’t rate their friends at all.

Existing methods used by social service agencies involve selecting people who seem the most popular to serve as peer leaders to share information. Through the analyses, the researchers found that this strategy is less effective in spreading the word. It spread health information to only 27 percent of the population. Researchers found that there was too much overlap by those in the center. Those teens that were more central stayed in the same, fixed social circles so the information didn’t spread beyond the social groups.

On the other end, the USC CAIS algorithms HEALER and DOSIM helped social workers select peer leaders who spread health information to about 70 percent of non-leaders compared to the almost 27 percent reach of the current methods.

The key to prevention is getting tested. The existing information-spreading methods don’t convince teens to make an effort to get tested. The algorithms created by the USC researchers encourage testing. Teens selected by HEALER convinced 37 percent of their friends and peers to get tested for HIV and DOSIM selected teens that convinced 25 percent of their friends to seek testing.

Milind Tambe, a computer science professor at USC Viterbi School of Engineering who co-founded USC CAIS and co-authored the study said, "This paper shows the power of interdisciplinary research. AI algorithms for influence maximization were tested in the field to show the great benefits that accrue for low resource communities — research that would not get done without AI and Social Work researchers coming together to conduct it."

Eric Rice, an associate professor in the USC Suzanne Dworak-Peck School of Social Work, at USC who co-founded USC CAIS with Tambe, said, "It was inspiring to train these youth and watch them become such effective advocates in their community. We saw real changes in conversations about sexual health and HIV testing.The change in health behaviors and communication we saw were inspiring. But perhaps even more inspiring was watching the youth who acted as peer leaders grow and thrive. For several of them, this was a turning point in their lives and they are now off the streets and have jobs."

The researchers are now in the process of doing a more extensive study of these algorithms and additional variations. This study will look at the information flow among 900 homeless youth in L.A.

The paper [pdf] on this study was presented at the 2017 International Conference on Autonomous Agents and Multi-agent Systems.