A University of British Colombia researcher has developed an algorithm that could allow computer characters and robots to eventually learn complex motor skills like walking and running through a process of trial and error. 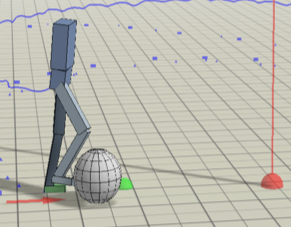 DeepLoco teaches animation to walk, run, and play soccer (Source: DeepLoco)The algorithm, called DeepLoco, offers a new way for animation artists to animate human movement in games and film. The current method of animation uses actors and motion capture cameras or animators. DeepLoco allows characters to move automatically in ways that are realistic while also being attentive to their surroundings and goals. This technology may allow two- or four-legged robots to eventually learn to navigate through an environment without hand-coding the rules.

"We're creating physically-simulated humans that learn to move with skill and agility through their surroundings," said Michiel van de Panne, a UBC computer science professor. "We're teaching computer characters to learn to respond to their environment without having to hand-code the required strategies, such as how to maintain balance or plan a path through moving obstacles. Instead, these behaviors can be learned."

Using this algorithm, simulated characters have learned to walk along a narrow path without falling off and avoid running into people or other moving obstacles. They could even dribble a soccer ball towards a goal.

The algorithm uses deep reinforcement learning, a type of machine learning algorithm where experience is gained through trial and error and is informed by rewards. The system identifies better actions in given situations over time.

"It's like learning a new sport," said van de Panne. "Until you try it, you don't know what you need to pay attention to. If you're learning to snowboard, you may not know that you need to distribute your weight in a particular way between your toes and heels. These are strategies that are best learned, as they are very difficult to code or design in any other way."

The motion of humans and animals is governed by physics and control. Humans learn motor control through trial and error, but it’s hard to tell how much the algorithm mimics this human learning process. The computer program also learns much more slowly than a human.

To learn more about the research on DeepLoco, which will be presented at SIGGRAPH 2017, visit the page here.