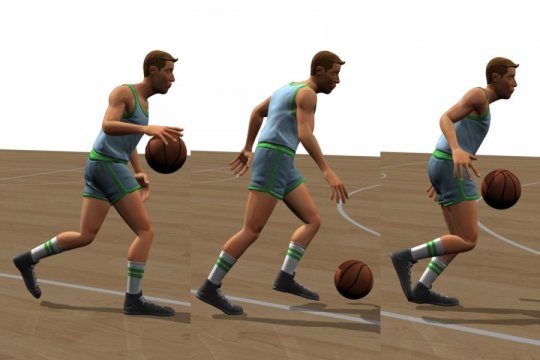 This trial-and-error method is time-consuming but it provides the most accuracy possible. While the method requires millions of trials, it allows the computer players to learn all the tricks with a lot of accuracy at the end of development. The computer players learned how to dribble between their legs and behind their backs, crossover moves and transition from one basketball skill to the other with the new method.

"Once the skills are learned, new motions can be simulated much faster than real-time," said Jessica Hodgins, Carnegie Mellon professor of computer science and robotics.

"This research opens the door to simulating sports with skilled virtual avatars," said Libin Liu chief scientist at DeepMotion and the report's first author, "The technology can be applied beyond sports simulation to create more interactive characters for gaming, animation, motion analysis, and in the future, robotics."

The physics-based method could be the key to creating even more realistic video games. In video game development, one of the hardest aspects to develop is the small details like how the player’s fingers move when dribbling the ball. Deep reinforcement learning methods were used to capture the tiny details.

As the input for the computer to learn from, the researchers provided motion capture data and videos of real people performing various moves with a basketball. The movements performed included rotating the ball around the waist, dribbling while running, dribbling while standing and dribbling with both hands.

Once the computer learns how to perform the dribbling movements, it uses trajectory optimization to calculate where the ball is most likely to move for every given hand movement.

The computer uses two stages of learning. In the first stage, the computer masters the locomotion of the movement. Then, in the second stage, the computer learns how to control arms and hands with the motion of the ball. These learning methods work for motions that don’t affect the animated character’s balance. The next step is to create a system that works for all kinds of sports and motions.

The method will be presented at SIGGRAPH 2018 in Vancouver, Canada.