No One Is Using Digital Assistants for Home Automation, Survey Says 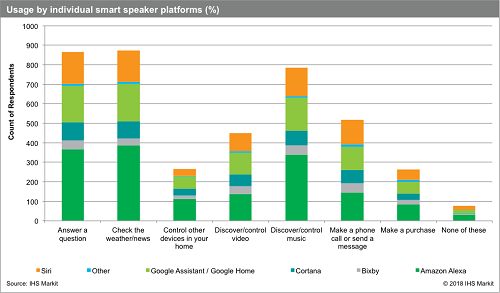 While home automation is growing in popularity, with smart speakers being the largest category of devices in most houses, a new survey from research house IHS Markit reported that most of these homeowners aren’t using voice assistants to control other smart home devices.

Instead, the predominant use of smart speakers in the home is regulated to asking questions, checking the weather, listening to news and playing music.

The survey — whose respondents were located in the U.S., the U.K., Japan, Germany and Brazil —said that 65 percent of those that responded used their smart speakers for these functions while only six percent reported using a smart speaker to control lights, televisions and other connected devices in the home.

Kozak said it is only a matter of time before more connected devices permeate homes and voice assistants become the primary means of interaction. Additional penetration of connected devices will be driven by new streaming devices such as the Amazon Fire TV Cube and other agnostic speakers such as the Sonos Beam, he said.

“To increase the number of consumers using smart speakers to control connected devices in the home, voice assistants will need to follow a path similar to the one taken by the Amazon Echo Plus, which comes with the ability to directly control low-power wireless devices, such as switches and plugs connected to ZigBee and Z-Wave,” Kozak said.

IHS Markit said the survey revealed that 40 percent of respondents own an Amazon Alexa device, while 23 percent own a Google Home and 20 percent own both. With more than 900 smart home device makers in this market with about 4,100 connected devices, smart speakers will continue to be the primary disruptor for the smart home, but door locks, connected appliances and thermostats will continue to play a role, the research firm said.

By the end of 2018, more than one million homeowner policies in North American will include at least one connected home device, IHS Markit forecasts. This will mostly be water-leak sensors, flow detectors or shutoff valves.

Kozak said the insurance industry is one of many different inflection points that are modifying decades-old practices to bring smart technologies to the masses and will contribute to continued growth in the smart home market once the technology becomes ubiquitous in the home.