Video: This Bipedal Elliptical Robot Can Keep Its Balance Without Sensors 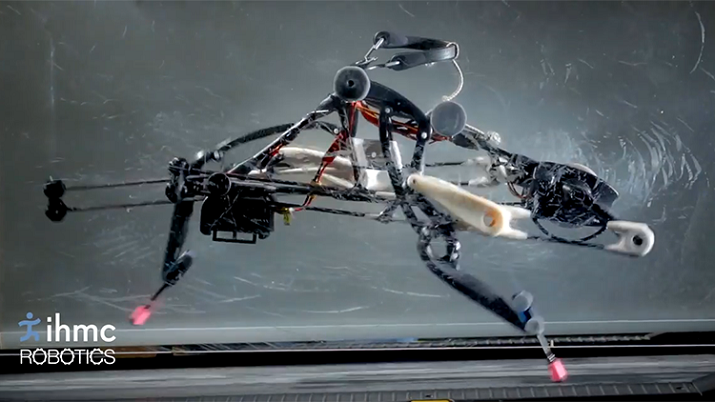 Walking robots have been rolling out fast and furious in 2017 with the robot cheetah that mimics the real animal, announced just a few weeks ago, and the February announcement of the two-legged Cassie robot that can sit and squat.

Now, the Institute for Human and Machine Cognition (IHMC) has introduced a two-legged robot, known as the Planar Elliptical Runner, which is being used as a project to test how mechanical design can be used to enable legged locomotion in robotics.

Researchers at IHMC tested the robot on situations involving a treadmill and running behind a car (that had to be assisted by an engineeer). Unlike some of the other robots introduced this year, IHMC’s machine doesn’t use sensors and a computer to help balance itself. Instead, the design of the robot provides dynamic stability as it runs.

While the Planar Elliptical Runner is a pilot project, researchers hope to gain knowledge from the robot to apply to more practical running robots to make them more efficient and natural looking.

The small animal-sized robot can run at up to 10 miles per hour but researchers believe a human-sized robot could reach 20 to 30 miles an hour. The robot has a single motor that drives the legs and the elliptical motion of its legs and its body shape provide stability.

While the current build of the robot needs glass walls to keep its balance on a treadmill, IHMC says it is working on a new version that will be stable to its left and right without the need for any walls.